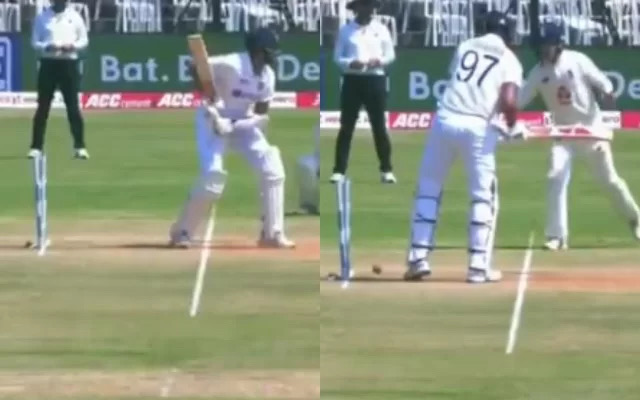 The first Test match between India and England may have ended on a sad note for the fans, but the match had few moments which stunned the viewers completely. While the wicket of Ajinkya Rahane left Umpire Nitin Menon shocked, bails lodging off from the stumps automatically when Ishant was batting made fans remember Dhoni.

The Indian top-order failed to deliver as the England bowlers made light work of the victory. After Rohit Sharma’s departure, Gill looked good before he faced a gem of delivery by James Anderson. The vice-captain Ajinkya Rahane met the same fate and got out in a similar fashion after escaping a close shave just a ball before. Anderson gave a masterclass in swing bowling as he castled both Gill and Rahane in the same over.

The incident made fans remember Dhoni

After Kohli got out to a Ben Stokes delivery, the win was a formality for the English team. However, a mysterious incident took place when Ishant Sharma was batting. Archer bowled a short-pitch delivery to the tail-ender and he went deep into the crease trying to keep the ball down.

While he was doing it, the bails fell off the stumps and it looked like Sharma had dislodged the ball with his foot.

The England players started celebrating as they thought they had got the final Indian wicket. The umpires on the ground sent the decision to the third umpire. As it turned out, the bails dislodged themselves and even the off stump moved back a bit. It was surely a freakish incident to have happened. This unusual incident was noticed by the viewers and it made the Indian fans remember Dhoni.

England didn’t have to wait for a long time for the last wicket though. Archer claimed the last wicket of the Indian inning in the form of Bumrah and his team got a 1-0 lead in the series. The second match of the four-match series will take place at the same venue.