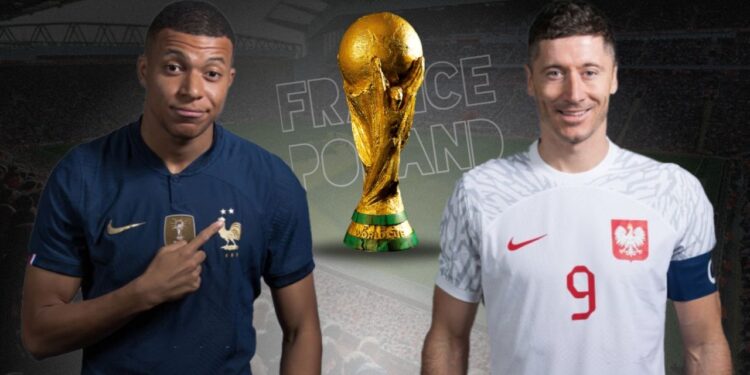 Today, Defending champions France will take Robert Lewandowski-led Poland in the round-of-16 match. Poland were lucky to make it to the last 16 due to a better goal difference as Mexico also had the same points as of them. On the other hand, France won the first two games of the event but they were upset by Tunisia in the latest game. Meanwhile, fans in India want to know on which channel they will be able to watch France vs Poland match’s live telecast. In this space, you will find the broadcasting and streaming details of mentioned FIFA World Cup game.

France and Poland will meet for the 17th time today. If we look at the previous records, France has had an upper hand over the Poles as the former has won 8 matches while the latter could win only 3 out of 16 matches. Although, stats are just numbers, so, the French won’t take Poland lightly today, especially after their 1-0 defeat against Tunisia.

Sports 18 channel is broadcasting the coverage of the FIFA World Cup in the country. So the live telecast of France vs Poland match will be available on the mentioned channel. You can watch it either in SD or HD format and the commentary on Sports 18 will be in English. The viewers who want to watch the France-Poland game in Hindi commentary need to subscribe the MTV HD channel.

France vs Poland Channel Number on DTH services in India:

Viacom-18’s Jio Cinema app is streaming Football World Cup in India. So, fans who want to watch France vs Poland match online can download this app from Play Store or App Store. Also, this app is free of cost and matches on it can be streamed without any subscription. It’s worth mentioning that Jio Cinema is giving an option to fans to watch the live stream in five languages in English, Hindi, Tamil, Malayalam, and Bengali. Also, in the app, a special feature called ‘Hype Mode’ is available for FIFA WC games which will take your viewing experience to the next level.