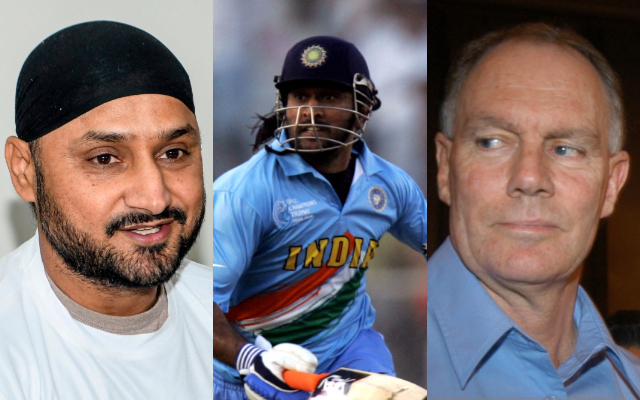 The entire cricket universe, be it the fans or even the players, everyone’s aware of MS Dhoni’s ability to finish off a game with his batting prowess. For all through his career, Dhoni on most occasions has been a reliable finisher; a role that has eased pressure off the top-order batsmen.

Former Team India coach, Greg Chappell seems to have taken all the credit for Dhoni being ‘such a good finisher’. On a recent Playwrite Foundation’s online talk with Charu Sharma and Vivek Atra, the Australian spoke of how he once challenged Dhoni to bat in a way that saw him become the best finisher in the world. “I remember when we played the home series against Sri Lanka in 2005. Dhoni scored over 180 runs in a match. He played in a different way, he hit a lot of fours, hit many sixes”, recalled Chappell. ” I felt that if he could learn to hit the ball on the ground as well, even though he was good at putting boundaries, it was a risky way of playing. I believed that if he does, then only he can become one of the best finishers of world cricket”, he added.

However, Chappell’s claim hasn’t quite going well with few former cricketers; the recent one being Harbhajan Singh. The off-spinner expressed how Greg Chappell becoming the coach of Team India was the worst thing to happen to Indian cricket. Not only this, the entire tenure of Chappell being associated with the team was a controversial one. Disagreements grew within the team and the healthy atmosphere began to cease. Taking a direct dig at Chappell’s claims, Harbhajan tweeted – ‘He asked Dhoni to play along the ground coz coach was hitting everyone out the park.. He was playing different games’

He asked Dhoni to play along the ground coz coach was hitting everyone out the park.. He was playing different games 😜#worstdaysofindiancricketundergreg 😡😡😡 https://t.co/WcnnZbHqSx

Besides Harbhajan, former captain Sourav Ganguly also expressed his discomfort during Chappell’s coaching stint. “Hiring him was the biggest mistake of my career. I had known a different person from a stint as my batting coach in Australia. I don’t know what led to our relationship breaking down. After the 2007 World Cup, I haven’t interacted with him,” said Ganguly.