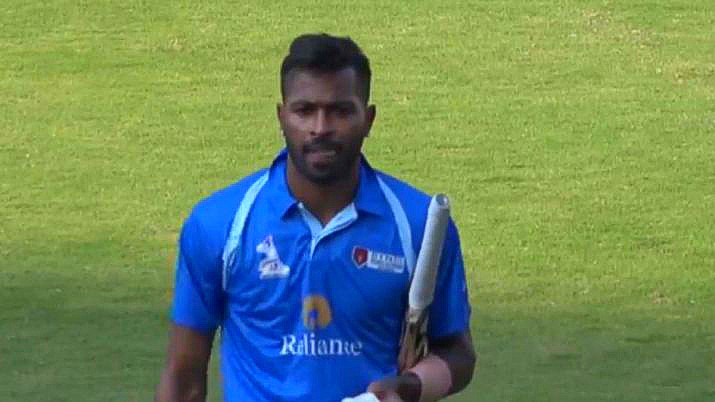 After being missing out from the cricket action due to injury, Hardik Pandya has made a comeback through DY Patil T20 Cup. The Indian all-rounder is playing for Reliance 1 in the Mumbai based tournament. On Wednesday, Hardik Pandya showcased his power-hitting ability as he scored 105 runs off 39 balls in Reliance 1 vs CAG match. The 37 ball century of Pandya helped his team put a mammoth total on the scorecard.

Reliance 1 batted first and had a bad start as opener Shikhar Dhawan went for a duck. The 2nd wicket fell at the score of 45 runs. The all-rounder came to bat at no.4 position. Pandya started the innings in his typical style and created havoc on the opposition. The 26-year old all-rounder smashed 10 sixes and 8 fours during his 105 runs knock.

180 runs partnership between Hardik Pandya and opener Anmolpreet Singh took the score of  Reliance 1 to 252 in 20 overs vs CAG. Anmolpreet scored 88 off 51 balls before getting dismissed in the final over. Pandya shone with the ball too as he dismissed 5 CAG players in his 4 overs. The five-wicket haul and 105 runs of Hardik Pandya took his team to an easy 101-run win.

This was the 2nd match of Hardik Pandya in DY Patil T20 Cup. Before this, Pandya displayed an all-round performance against Bank of Baroda as he smashed 38 off 25 balls and also picked 3 wickets to help Reliance one winning the match by 25 runs. Below is the video of Hardik Pandya 37 ball century in reliance 1 vs CAG match.

Shikhar Dhawan and Bhuvneshwar Kumar who are also missing out from the Indian team due to injury are playing for Reliance 1. However, both are not able to pull off an expected performance. Reliance 1 has one more match left in the tournament which to be played on 4 Match. Meanwhile, Hardik Pandya is likely to make a comeback in the Indian side from the upcoming ODI series against South Africa. Team India will play 3 One day matches against Quinton de Kock-led side. The series will start with Dharamshala ODI on 12 March.