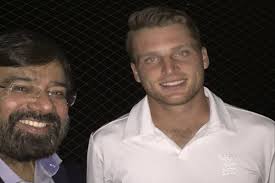 England captain Joe Root continued his stellar run of form in red-ball cricket on day one of the first test against India at Chennai. Featuring in his 100th test match for England, the dynamic Yorkshire batsman struck his 19th test century to put the tourists at driver’s seat.

The English skipper walked into bat at a rather tricky situation for his team. After an impressive opening partnership of 63-runs, England’s momentum was abruptly pegged by two quick dismissals before lunch. Root, however, wasn’t deterred by all the chaos around him; and joined forces with opener Dominic Sibley (87 off 286 balls) to stitch a defining 200-run partnership for the third wicket. Thanks to their resistance, England ended day one at a commanding position of 263/3, with Root staying unbeaten on 128.

The cricketing fraternity was generous in bestowing praises upon Root for playing a true, captain’s knock. No sooner had he scored his hundredth run than Twitter started to erupt in his applause. The likes of Ian Bell, VVS Laxman, Wasim Jaffer, and Brad Hogg greatly appreciated the England captain’s inspiring knock.

Great way to start the series, skipper leading from the front and showing the way! Well played @root66 👏 100 in 100th test👌 #INDvENG pic.twitter.com/LJrEqw7kUi

Magnificent 100 in his 100th Test for @root66 Its been a Subcontinent masterclass yet again. Loved his technique and approach especially against Spinners. #INDvsENG #class #leadingfromthefront

Even some celebrities outside of cricketing circles expressed their admiration. One of them being Harsh Goenka; a famous Indian business tycoon from the RPG group. But in the process of lauding Root for his efforts, Harsh ended up making a terrible faux-pas that stirred quite a bit of sensation on Twitter.

In his congratulatory post aimed towards Root, Harsh uploaded a picture of himself and… Jos Buttler, England’s wicket-keeper! That’s correct; Harsh confused in recognizing both the cricketers and made no attempt of fact-checking before uploading the photo. To make matters worse, he also captioned the image mentioning how ‘Root’ wondered why no IPL team selected him in the auctions. 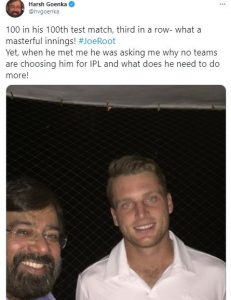 100 in his 100th test match, third in a row- what a masterful innings! #JoeRoot
Yet, when he met me he was asking me why no teams are choosing him for IPL and what does he need to do more!

Deleting tweet not enough to save Mr. Goenka blushes

Thankfully, Harsh deleted and reposted a tweet without any image to stop further confusion. But that didn’t prevent Twitter users from taking screen-shots of his erstwhile tweet and giving him a hilariously hard time for the same! Here are some of the best reactions: