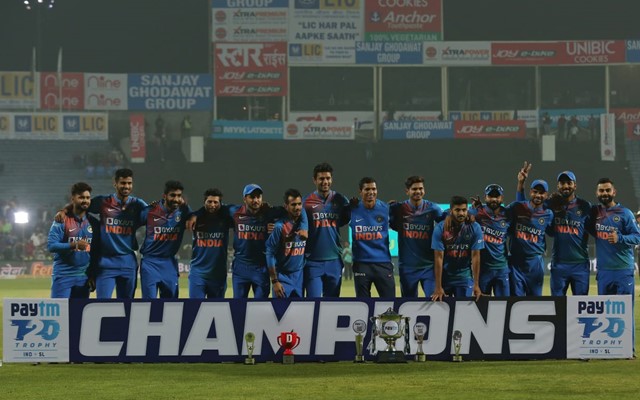 Here is the reason behind Sanju Samson missing from team India picture at trophy celebrations: On Friday, with 78 runs victory over Sri Lanka, Team India clinched the three matches T20Is series by 2-0. After giving a huge target of 202 in the last match of the series, the Men in Blue decimated the Sri Lankan batting force. And gets them all out inside the 16 overs, hence they could manage to score only 123 runs. From Sri Lankan team only Dhananjaya de Silva managed to stay for a long time in the crease.

During the third and final match of India vs Sri Lanka T20I series, Sanju Samson got the chance in the playing 11 after a long wait of four years. This gathered the much attention of the fans as they were waiting for this for a long time. Not only this was good news for the Sanju’s fan but also Samson was permitted up in the order ahead of Virat Kohli. And by hitting six in the very first ball, he showed how desperate he was to prove his worth in the team. However, unfortunately in the second ball, he plumbed in front and joy didn’t last for long for the fans.

Team India after clinching the series in Pune, was on the peak for the celebration but one thing that left the Indian fans puzzled was the absence of Samson from the team picture at trophy celebrations. Actually, Sanju Samson didn’t join the team celebration picture as he joined India A team to travel New Zealand for practice games.

Just after the Team India win over Sri Lanka in the final match, Indian opener Mayank Agarwal shared a picture of himself along with India-A team including Sanju Samson while they were in the flight.

Them boys ready for the tour! 😬 pic.twitter.com/865UXYJh7S