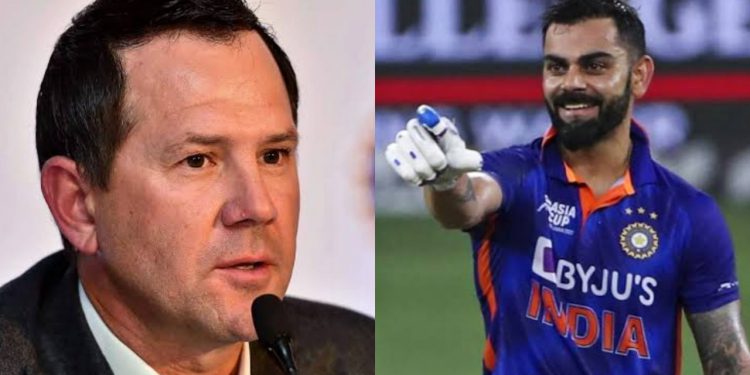 There is no doubt in the fact that Virat Kohli has been one of the strongest pillars of the Indian team for so many years. The star Indian batsman was not on song for a long period of time, however he showed glimpses of his return to form in the recently concluded Asia Cup. The Indian batsman finally broke the jinx and scored his long due 71st century against Afghanistan and Ricky Ponting shares his view on whether Kohli will score 100 centuries or not.

The Master Blaster Sachin Tendulkar holds the record for the greatest number of international centuries with a staggering 100 hundreds for his team. When Virat Kohli scored his 71st century, he equaled the record by former Australian captain Ricky Ponting, who himself boasts of 71 international centuries and is on the second spot only behind Tendulkar. Ponting was recently asked about Kohli’s chances of reaching the milestone of 100 centuries and Ponting expressed his opinion.

Talking in the recent episode of The ICC Review, Ricky Ponting was quizzed about Kohli’s chances of getting 100 international centuries and the former Australian captain mentioned that though he can never underestimate Kohli, the chances are slim considering the batsman’s age and the tally that he needs to match on to. However, Ponting didn’t deny the fact that Virat Kohli can actually do it.

Replying to Sanjana Ganesan on the podcast, Ricky Ponting said, “If you would have asked me three years ago I’d have said yes, but the fact that it has slowed down as much as it did yeah, I still think that it is possible for him, there’s no doubt. I still think he has got a number of years ahead of him, but I guess to still be 30 international hundreds behind, that’s a lot.

Whether Virat Kohli reaches 100 international centuries or not is a different question altogether, but his return to form is going to be extremely crucial for the Indian team as they enter the upcoming T20 World Cup 2022. The 2022 edition is going to be held in Australia and the BCCI has already announced their squad for the marquee event.