The ball slipped out of Fazalhaq Farooqi's hand to such a degree that even if three Cameron Greens were stacked on top of each other, they'd still not be able to lay bat on it. 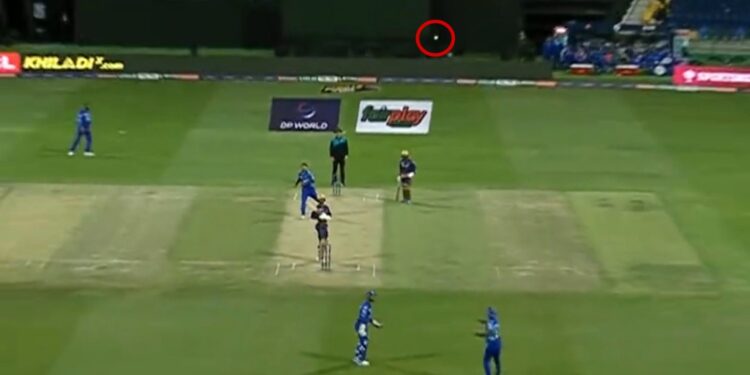 Left-arm Afghanistan pacer Fazalhaq Farooqi during an International League T20 match bowled a beamer intended to pierce the skies and hence, finds himself in the headlines, again.

Farooqi had broken the cricket news circle a month ago too, owing to his alleged inappropriate exchange with female staff at the Big Bash League that got him thrown out of the tournament.

The artful delivery came in the 2nd over of January 23’s ILT20 fixture between Abu Dhabi Knight Riders and MI Emirates. It was the 23-year-old’s first delivery of the evening. He was bowling the second over for MI Emirates after his skipper Kieron Pollard opted to bowl first.

The ball slipped out of Farooqi’s hand so much so that it not only flew over Knight Riders opener Brandon King, but also Emirates keeper Nicholas Pooran as well as Dwayne Bravo at slip.

The lack of control from Fazalhaq Farooqi was such that the beamer rose to a peak height of some 20-odd feet, clearing the 30-yard circle without a bounce before it found its path to the boundary cushions. The delivery was also deemed a no-ball for height.

Even if three Cameron Greens (6½ feet each) were stacked on top of each other to face the ball, it would still have raced away to the fence.

Notably, the waywardness from Fazalhaq Farooqi continued for a major chunk of his first two overs, as he leaked 23 runs off them.

The pacer, however, made up for his misdeed by bowling 12 brilliant deliveries at the fag end of the innings without giving a single boundary; also accounting for 2 scalps, including that of a well-set Russell.

The double strike from Fazalhaq Farooqi (2 for 27) resulted in a drop in the Knight Riders’ run-rate in the remaining overs, and helped restrict them to 170 runs.

The chase from MI Emirates turned out to be a last-ball thriller that they managed to win after hitting 20 runs off the last over.

Najibullah Zadran (35* off 17) was given the Man of The Match award for his last over heroics. The left-hander found able support in DJ Bravo (15* off 6) in his late assault, the platform for which was laid through Fletcher’s 53 run knock.