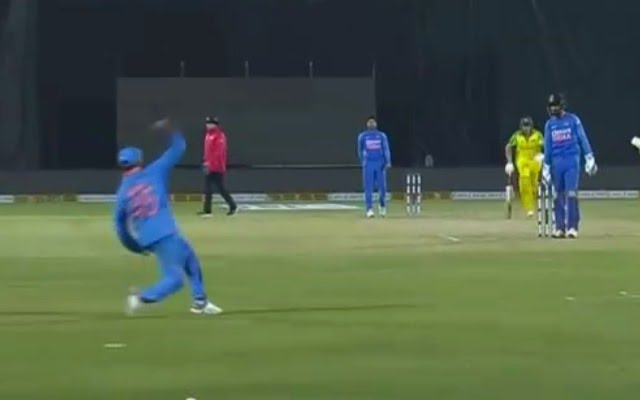 India bounced back from their 10-wicket loss to the mighty Australians at Wankhede to register a 36-run win in the second ODI at Saurashtra Cricket Association Stadium, Rajkot against their nemesis on Friday.

Rohit Sharma, who scored 42 in India’s mammoth total of 340, tricked Aussie batsmen Steven Smith and Marnus Labuschagne in the 23rd over of Australia’s batting.

On Kuldeep Yadav’s fourth delivery Labuschagne paddled over KL Rahul to dart for two runs, while the duo was running the second run, Rohit, who was fielding at backward square, moved across to fake a throw. However, Rohit was lucky enough of not being spotted by the umpires at that time else he could have faced a fine for the act.

Watch the full video below:-

Meanwhile, in the first innings, Aussie pacer Kane Richardson, too faked a throw while Rohit was batting, it was the reaction from India’s limited-overs vice-captain, that went on to be termed as an act of perfect revenge. It was all in a light note as Richardson escaped a penalty, it was a very fare dig taken by Rohit that ended without any trouble.

Further in the match, Rohit injured his shoulder in the 43rd over when left-handed batsman Ashton Agar sliced Navdeep Saini’s fourth delivery into the gap,  Rohit came with a spectacular dive, to save a boundary, after he sprinted from sweeper cover region. After the save, the fielder looked in intense pain and left off the field after he was observed by physio Nitin Patel.

Indian skipper Virat Kohli updated on his deputy’s injury, hoping him to take his place in the series finale at M. Chinnaswamy Stadium, Bengaluru on Sunday.

“I asked Rohit briefly just now. It’s that left shoulder which has popped out a few times. There’s no tear, so hopefully, he should be back for the next game,” Kohli said in the post-match presentation ceremony.