Mankad has been the talk of the cricketing town since the last couple of weeks. 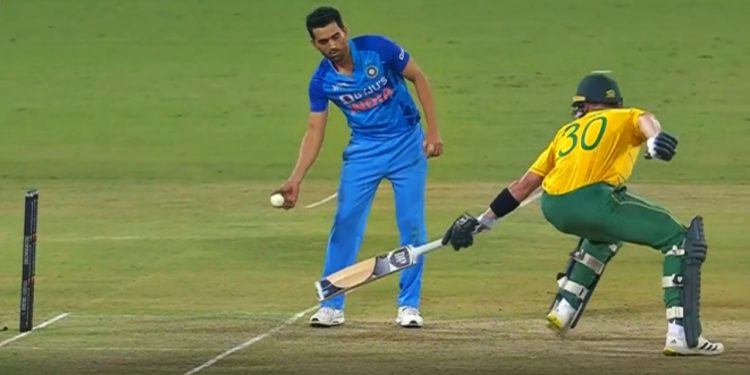 Charlotte Dean fell to Deepti Sharma’s Mankad during IND vs END ODI game a couple of weeks ago.

Ever since that, runout at bowler’s end without the ball being bowled (Mankad) has made headlines. Recently, a women cricketer’s failed attempt of the same during a local game had also gone viral.

India and South Africa are playing 3rd and last T20 international of the 3-match series at Indore tonight.

During the game’s 16th over of the dead rubber, Indian right-arm bowler Chahar came to bowl with Russouw at strike and 22-year-old bit-hitter Tristan Stubbs at the other end.

Stubbs –as Deepak Chahar came running in– dragged his bat a little outside the create at the bowling end as the bowler aborted his delivery and instead turned back to Mankad Stubbs.

However, he looked at Stubbs and laughed a little– offering a hilarious little warning to the batter.

Tristan Stubbs too looked at the funny side of it and the two players giggled hard with their teeths out as if checking who’s are whiter.

Coming to the match itself, Rilee Russouw and Quinton deKock clubbed the ball to all parts of ground. The duo shared a 90 run stand for the second wicket.

Unless the South African bowlers bowl poorly and Mohammed Siraj smacks 109 notout, chasing 228 down will be hard for India.