India vs Australia 2023 Test Series: Dharamshala to host one game, a pink-ball match to be played

The next Border-Gavaskar series is scheduled to play in India. 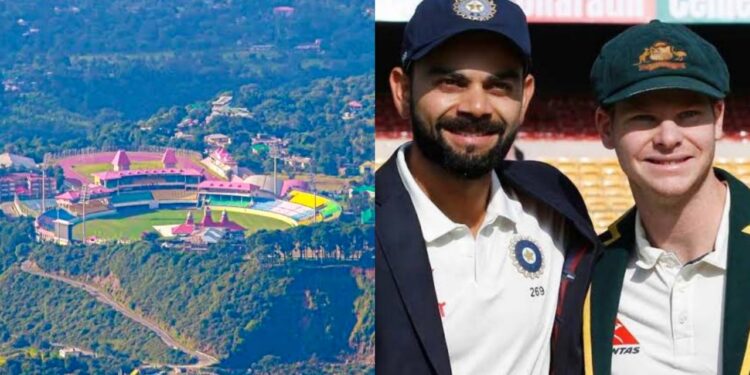 HPCA Dharamshala to host one of the 4 Tests (Pic -Twitter)

BCCI is all set to host a four-match India vs Australia test series (Border-Gavaskar series) in February-March next year. Chennai, Delhi, Dharamshala & Ahmedabad will be the four venues for the upcoming series.

The Indian Team is all set to play crucial test series against Australia in February-March that might decide their future for the World Test Championship Finals. The capital city will host a test after 5 years while the other three venues are Ahmedabad, Dharamsala and Chennai. These will be the last four games for India in the second edition of the World Test Championship cycle. Delhi last hosted a test match in 2017 against South Africa while Dharamshala has just hosted a single test till now which was played in 2017.

“Delhi is likely to host the second of the four Test matches as of now. The dates will be out as and when the Tours and Fixtures committee hold its meeting. Dharamsala, which hosted its first and only Test almost six years back, against Australia in March, 2017, will probably host the third Test,” a senior BCCI official told PTI on the condition of anonymity.

Ahmedabad’s Narendra Modi Stadium is expected to host the fourth and final test. However, it’s not yet decided which test will be the pink-ball test. BCCI has hosted three day-night tests till now. The inaugural pink-ball test was played at Eden Gardens and the next two at Ahmedabad and Bengaluru respectively.

Australia will play six Tests at home against South Africa and West Indies this year while Team India will play a two-match test series against Bangladesh this year in December which will be hosted in Bangladesh. Indian Team will need to do really well against both Bangladesh and Australia in order to seal a spot for the WTC final.

The Australian team is placed at the top position in the World Test Championship cycle and might not let the Indian Team dominate them in the four-match series while the Men in Blue will have to pull their socks up to grow ahead in the points table as they’re currently placed at the fourth position.