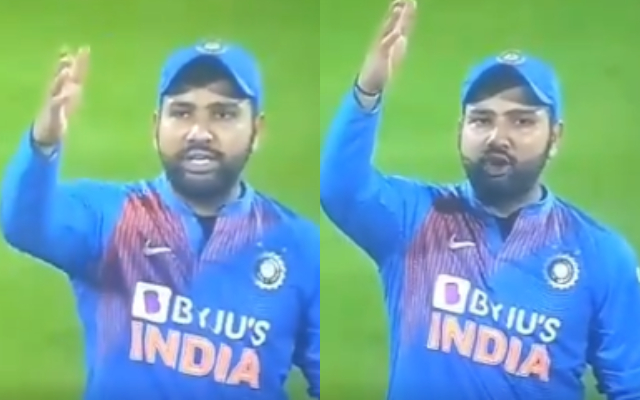 Rohit Sharma Abuses After Third Umpire Mistake: Team India is currently playing 3 matches T20 series against Bangladesh. Meanwhile, India vs Bangladesh series is now at 1-1 level, as India defeated Bangladesh in the second T20 match. The third and final T20 match of the series has been scheduled at VCA Stadium in Nagpur. Thereafter India and Bangladesh have to play two matches Test series starting from November 17.

During the second match of the ongoing T20 series against Bangladesh, Indian captain Rohit Sharma abuses after the mistake from the third umpire. As we all have seen that Rohit Sharma is one of the coolest members of the team and never showed his anger. However, now he has the responsibility of the team so he couldn’t manage to hide his anger as the third umpire mistakenly pressed the wrong button.

It all happened in the 13th over of the innings when Yuzvendra Chahal was bowling. And in the final ball of the over Bangladesi batsman misread his googly. Rishabh Pant carried out the formality by whipping off the bails in a flash. However, the on-field umpire went upstairs to be certain that the Indian wicket-keeper collected the ball neatly.

And when the replays showed over the big screen, it looks an easy decision for the third umpire. However, still ‘Not Out’ appeared on the big screen. The Indian players and the fans were baffled but as Sarkar was preparing to walk back into the middle. As soon as umpire got his mistake he changed the ‘Not Out’ signals to ‘Out’.

Rohit Sharma who was playing his 100 T20 International, was not happy with the third umpire and he raises his hands towards TV umpire with some words. Here we are sharing the video of the incident.

Earlier, in the match, Rohit Sharma after winning the toss had invited the visitor’s team for batting first. Bangladesh had set a target of 154 in 20 overs in front of the Indian batting line-up. However, the wicket was very good for batting. And in results, Rohit Sharma’s innings helped team India to chase down the score comfortably.