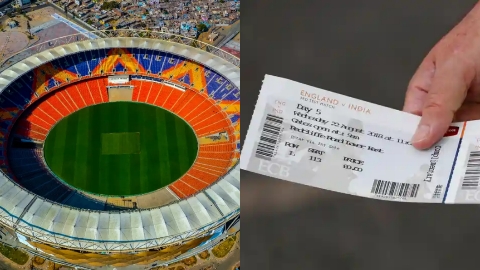 The international cricket in India is returning after almost one year with the upcoming series against England. Virat and co. will host a Joe Root-led side in 4 test matches. The first two matches will take place in Chennai while the 3rd and 4th tests are scheduled at Motera Stadium, Ahmedabad. Recently, BCCI allows 50% crowd for the matches in the world’s biggest stadium. With the news, fans are eager to book India vs England Ahmedabad test tickets. Alongside, Motera, the board has also put half of 2nd Chennai match tickets on sale.

However, there will be no crowd in the opening match of the series. Tamil Nadu Cricket Association revealed that BCCI communicated with them regarding the availability of fans. However, it was too late to make arrangements for the first test. Chepauk has a seating capacity of 38,000 but only 12,000 to 15,000 tickets will go on sale as no fans will be allowed at pavilion and terrace stands. The board takes this stadium because they don’t want fans to go near players.

On the other hand, Motera has a total capacity of 1,10,000 people. The government has allowed Gujarat Cricket Association to put half of India vs England Ahmedabad tickets of the 2021 test series on sale. So around 50,000 fans are expected to watch the 3rd and 4th games. As per reports, BCCI has decided to extend an invitation to PM Narendra Modi to inaugurate the arena on the opening day of the 3rd test which will be a day-night match. The venue will also host all 5 matches of the T20 series.

Fans can book the tickets for all the matches at the official website of GCAand Bookmyshow as soon as they make them available. However, currently, there is no update on when the tickets will go live. Some tickets of the 3rd and 4th Moeta test might be available at the stadium counters.

Meanwhile, all the India and England players have test negative. Yesterday, Indian players were seen sweating out at nets. The series will begin with a close door match at Chennai on 5 February. While the next 3 matches are scheduled to begin on 13 February, 24 February and 4 March respectively. The series is a part of the ICC Test Championship and is crucial for both teams to qualify for the final.