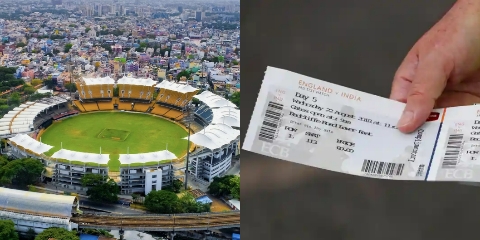 The 2nd test match at Chennai between India and England will mark the return of the crowd in the Indian cricket stadiums. BCCI had communicated Tamil Nadu Cricket Association (TNCA) regarding the allowance of the fans at Chepauk stadium. However, the board had not enough time to make arrangements for the 1st test. The opening match of the series is currently being played under closed doors. But TNCA has announced that they will put half of the 2nd India vs England Chennai test tickets on sale. The match will begin on 13 February.

Chennai’s M. A. Chidambaram stadium has a capacity of 50,000 people but the board will put only 15,000 tickets on sale. No fans will be allowed in the pavilion and terrace stands as the TNCA doesn’t want people to come near players. Tickets booking for the 2021 Chennai test between India and England will begin on 9 February. Fans can only buy tickets online as stadium counters will remain shut. However, the price is not yet revealed.

Tickets may be available at Bookmyshow and BCCI’s official website. However, we have to wait for the official confirmation. You can press the bell icon at the right of this page to get instant notification whenever India vs England 2nd test tickets will go live. Following Chennai Test, India will play two tests at Ahmedabad in front of spectators. Half of the crowd will be allowed in both Motera matches.

The 3rd test match of the Ind vs Eng series will a day-night clash at Motera. According to reports, PM Narendra Modi will be the chief guest on the inauguration day of the world’s biggest cricket stadium. The stadium will also host 5 T20I matches between the two sides. Like test, 50% of the spectators can buy tickets of the limited-over matches.

ALSO READ: India vs India A to take place ahead of India’s Tour of England 2021

Ongoing India vs England test series is part of the ICC test championship and is crucial for both teams to reach the final. Meanwhile, New Zealand has already qualified for the mega match at Lord’s cricket ground, London. One team from India, England and Australia will face the Kiwis in the title match. The final of the world test championship will take place from 18 to 22 June.