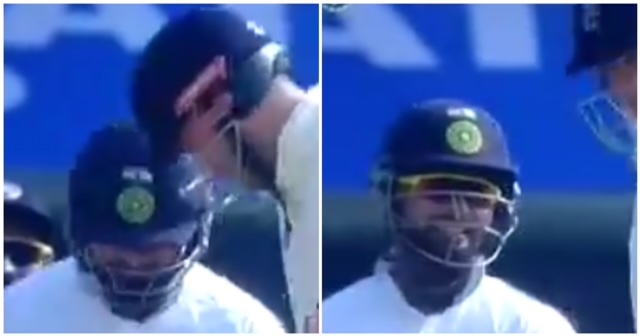 On Friday, the much-awaited India vs England 2021 series commenced in Chennai and Day 1 game’s summary was in England’s favour. After winning the toss, English team decided to bat first at MA Chidambaram Stadium. Apart from Joe Root’s centurion innings, Rishabh Pant’s hilarious stump mic comment which gets the attention of the fans.

It all happened in the 70th over of England’s first innings, when Dominic Sibley defended a ball from Washington Sundar. Indian wicketkeeper Rishabh Pant, from behind the stumps, tried to cheer the bowler hilariously. Actually, he used his sense of humour for which he is known for while standing behind the wickets.

Many times fans have witnessed Rishabh Pant’s hilarious engagement with the batsman but this time he used the name of bowler ‘Washington Sundar’ to make a funny line like a poet.

He rhymes a line from behind the stumps, “Mera naam hai Washington, mereko jana hai DC.” Hence, Pant’s hilarious comment video gets viral over the internet. Here Sportstime247 is also attaching the video of the same below.

Earlier, England skipper Joe Root after winning the toss decided to bat first at MA Chidambaram Stadium in Chennai. Meanwhile, English openers Rory Burns and Dominic Sibley managed to give a start for the team. The first session of India vs England 2021 Day 1, the game was almost in the favour of England but just before the end of session 1, Indian team took 2 wickets quickly thanks to R Ashwin and Jasprit Bumarah.

Before getting out Rory Burns managed to score 33 off 60 and Daniel Lawrence couldn’t even get open his account. Thereafter for the third wicket skipper Joe Root along with Dominic Sibley made a strong partnership of 200 runs.

Skipper Joe Root, who was playing his 100th match, scored the 20th century of his career. This was his third consecutive hundred, after 2 hundred against Sri Lanka in the last series in Sri Lanka.

It was looking difficult for the Indian team to get out the batsman, as Joe Root and Dominic Sibley were playing carefully. However, in the last over of day 1, Jasprit Bumrah gets Dominic Sibley in front of the wickets. Hence Sibley gets out for the score of 87 and missed a well-deserving century in Chennai.