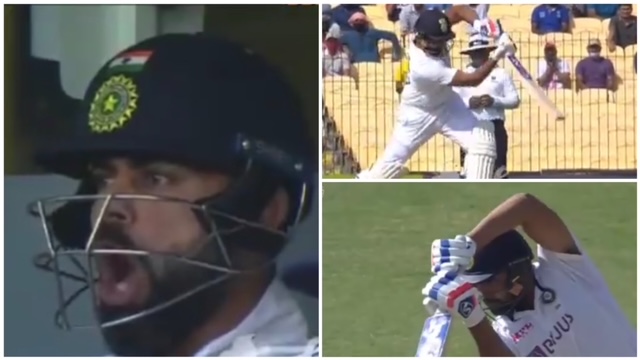 For a long time, the rumour of rift between Indian skipper Virat and Rohit Sharma have been making rounds on the Internet. But many times the duo has proved that everything is ok between them. And now once again, on Saturday, Virat Kohli proved it when he came up with a lovely gesture after a cracking shot from Rohit Sharma during the second test match of ongoing India vs England 2021 Test Series.

It all happened on the very first ball of the 3rd over during the second test match of ongoing India vs England  2021 test series. India had already lost opener Shubman Gill for a duck and team was under pressure, Rohit Sharma hit a cracking shot for a boundary through the cover area to open team’s and his account. As soon as the ball hit Rohit’s bat, Virat shouts loudly ‘Yes Boy’. The video of the incident is getting viral on the internet, here we are attaching the same below.

Earlier, India after winning the toss opted to bat first at MA Chidambaram Stadium in Chennai. Meanwhile, England got a good start as Indian opener Shubman gill lost his wicket for a duck. Thereafter, India was on the backfoot but Rohit showed his class and played extraordinarily. He played with good strike rate and Chetswar Pujara also defended the balls nicely. However, in the 21st over, Cheteshwar Pujara gets out after scoring 21 runs off 58 balls. Then, Indian skipper, Virat Kohli joins the middle, but unfortunately, he couldn’t even get off the mark before getting out in the hands of Moeen Ali.

At the end of the first session, India lost three crucial wickets for the score of 106 in 26 overs. Rohit Sharma scored 80 runs off just 78 balls in the first session and will continue to bat in the second session along with Ajinkya Rahane on the other end.