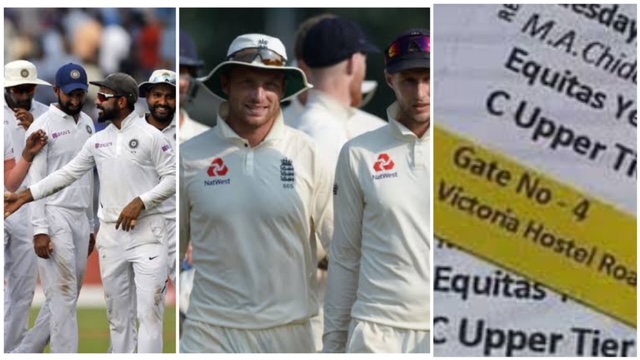 England tour of India is all set to start from 5 Feb with an inaugural test match at MA Chidambaram Stadium in Chennai. This four matches test series will be very important for both the teams in order to qualify for the ICC Test Championship final match. Hence both teams will try their best to win the test series. Since a long time, Indian fans were eagerly waiting to host matches in their country. And now when India vs England Test series 2021 is starting from next week, fans searching how to buy tickets, to know the price and availability of the tickets for booking.

Let you all know that Chennai is hosting a test match after more than four years. Last time at this venue a test match was played was in 2016.

At MA Chidambaram cricket stadium in Chennai, India and England have played 9 matches in the history. Out of which, Team India won 5, England 3 and 1 remain as a draw. Indian fans will be happy to have the first match at this venue as it was in 1985 when England team last time here won the test match.

From a while, fans are continuously searching about the tickets availability, price and booking of the India vs England Test Series. However, they are unable to get proper knowledge about it. Here Sportstime247 will let you know about all the details about the availability of the tickets.

As far as there is concern regarding the booking of the tickets in the mind of the fans. Let you all know that the first two matches of India vs England 2021  will be going to play behind closed doors as a “preventive measure” keeping in mind the COVID-19 pandemic. So there will be no availability of the tickets for the first test match as well for the second test match.

Also Read: India vs India A to take place ahead of India’s Tour of England 2021

Although there is no official statement yet regarding the entry of the fans for the third and fourth test match. But there might be a possibility that fans will be going to get an entry into the stadium for the third Test in Ahmedabad.