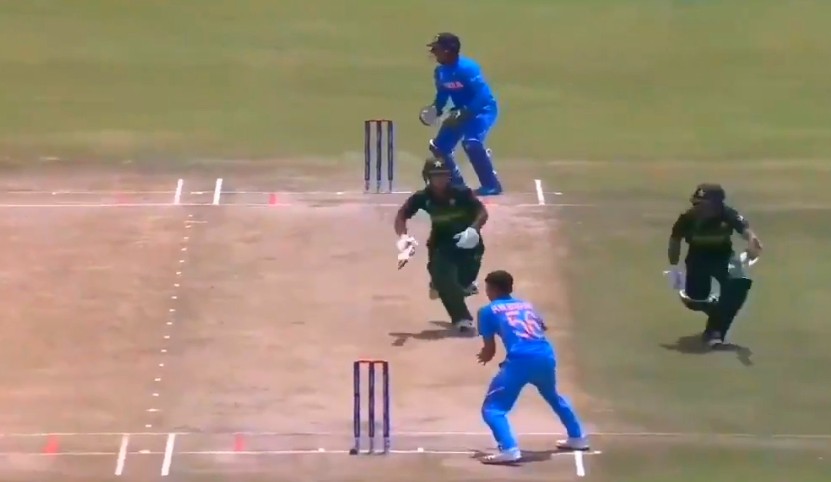 India vs Pakistan under 19 cricket World Cup 2020 semi-final match is currently being played. The Pak captain Rohail Nazir won the toss and elected to bat first. The Pakistani side didn’t have a great start as they lost their first two wickets at the score of 34 runs.

However, the skipper Nazir and opening batsman Haider Ali put the boys in blue back on track. The duo put together a 62 runs partnership for the 3rd wicket. But once Ali was out after scoring a brilliant 56, the Pakistan batting line-up started tumbling.

India vs Pakistan Funny Run Out

However, the skipper was set at the one end but didn’t get the support of his teammates. Rohail Nazir also played a part in one of his teammate’s dismissal. Qasim Akram who was new at the crease looked to provide support to the well set skipper. On 31st over, Qasim pushed a delivery towards off-side.

Both the batsmen ran for a quick single but when both were reached at the middle of the pitch, Nazir felt that he would not make it and he took a U-turn towards the non-striking end. Qasim Akram too tried to reach the safe. It was a race between both batsmen and the skipper won it comfortably. In the meantime, the Indian wicket-keeper had collected the throw and removed the bails. Qasim Akram was run-out after scoring 9 runs.

If run-out is an art, Pakistan is the Picasso of it.

In the past too, senior Pakistan players have got involved in such comical run-outs. Twitter didn’t take it kindly and the netizens were quick to troll Pakistan. The Pakistan team could score 172 runs in the semi-final vs India. When this article was posted India had just started their innings and were playing 12 runs at the end of 2 overs.

The second semi-final to be played between New Zealand and Bangladesh on 6 February. The winners of both semi-finals will meet in the final on 9 February.