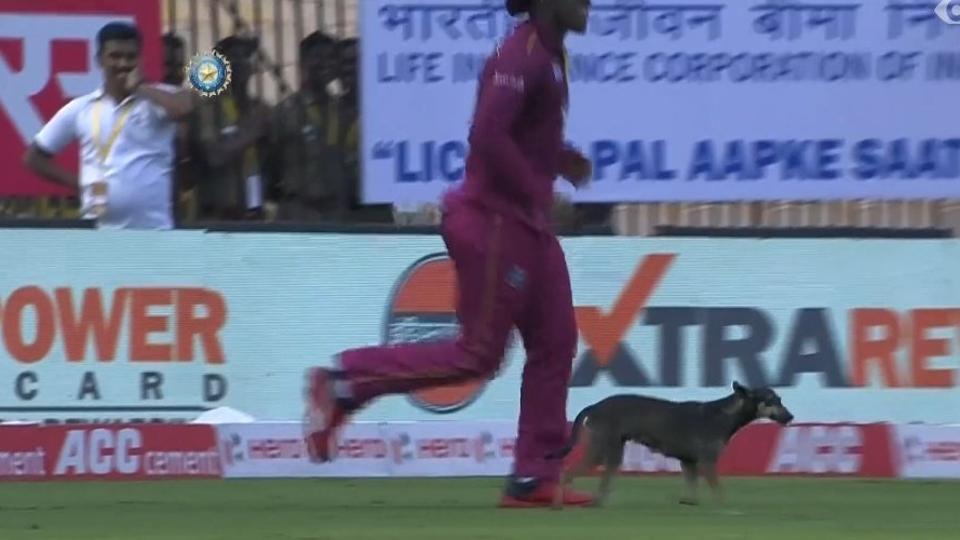 India vs West Indies: Play Stops After Dog Inside The Ground: After clinching the T20 series by 2-1, India took West Indies in the 1st match of ODI series at Chennai. West Indies after winning the toss invited the hosts to bat first at MA Chidambaram Stadium. Meanwhile, Indian top-order batsmen could not make any impact with the bat in today’s match. However, Indian young batsmen Rishabh Pant and Shreyas Iyer hold the pressure nicely and took the team towards a good total.

Rishabh Pant, who was facing criticism from the fans in the past few days, has today played a decent inning. And he has proved the team management decision right to give him continue chances in the playing 11. Although he is yet to perform well in the T20s format, this innings will definitely be going to help in boosting up his confidence.

Apart from this, in Today’s match a surprise guest who invaded the pitch which caused the play to be halted. This surprise guest was a black dog. We all have seen much time, fans have invaded Indian pitches during matches to shake hands and click selfies with their star player, but this a black dog has won the hearts of everyone. It was one of the cutest interruptions in the match ever had in cricket history.

The dog has entered the field of play when middle-order batsmen Rishabh Pant and Shreyas Iyer was batting. This incident stops the play for two-three minutes. It all happened in the 26th over when West Indies bowler Keemo Paul was about to take his run-up with Iyer on the strike. The players had to stop their play to wait for the dog out of the ground. As soon as the ground staff clears everything, the play gets to continue. Here we are sharing the video of the incident which is looking beautiful to watch.

Here is the Video (India vs West Indies: Play Stops After Dog Inside The Ground)