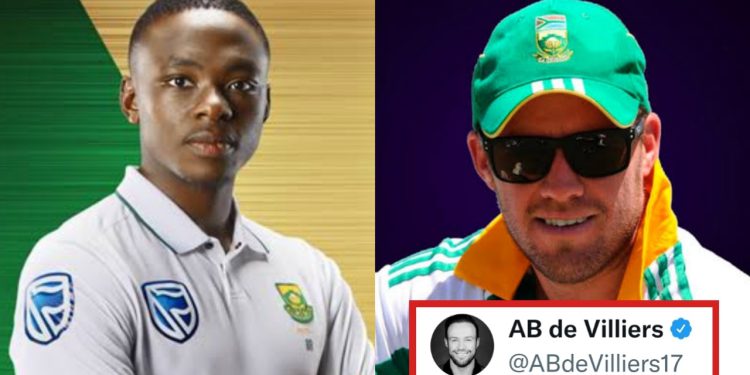 The Republic of South Africa finally started their red-ball tour of England on August 17 after a couple of days that saw their skipper Dean Elgar claim how the ‘new approach of the England Cricket Team wasn’t going to last against Kagiso Rabada, Nortje, and company.

Thus far, Elgar has been right. But more remarkably, a much more specific prediction about 27-year-old Kagiso Rabada made by former AB de Villiers has also turned out to be true.

Interestingly, less than two full days into the game, the prediction turned out to be a hundred per cent true.

“Nothing like Test Cricket!! Great morning for SA 💪 (Kagiso) Rabada my pick for five this afternoon,” read the AB de Villiers tweet.

Nothing like Test Cricket!! Great morning for SA💪
Rabada my pick for 5 this afternoon

Though a good chunk of action for the 1st day’s play was washed away due to rain, de Villiers’ prediction eventually held true as Rabada took 5 wickets for 52 runs.

Kagiso’s 19 over spell consisted of 3 maidens and included the scalps of Zak Crawley, Alex Lees, James Anderson, and Stuart Broad to go with the all-important one of a dangerous Ollie Pope (73 of 102).

Hmmm, Kagiso Rabada completed his 5-wicket-haul on the 2nd day. But technically, the words from AB de Villiers held a hundred per cent true as the number of overs bowled by then was just 45.

Since a prediction coming 100% true is rare, the internet soon started to hail Mr. 360 for nailing it. Here are a few tweets applauding de Villiers’ prediction-

What a prediction, GOAT. 🐐

Spot on prediction, real player on field and off field

Rabada 5 wickets ! What a prediction!! Now tell us when will RCB win an IPL trophy .

The overall match is running in favour of the Proteas at present. Post bundling McCullum’s side for just 165, SA is currently cruising at 289 for seven.