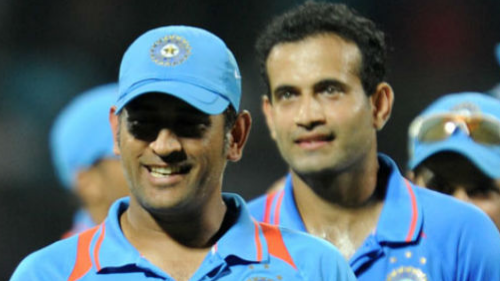 Recently, after CSK’s loss against SRH, Irfan Pathan tweeted a cryptic message which seemed to take a dig at Dhoni. Fans were quick to respond to the tweet. A lot of people criticized Pathan for his cryptic tweet targeting MS Dhoni. Irfan Pathan responds to his cryptic tweet on MS Dhoni, which received a lot of flak from the fans.

The story started after CSK’s loss against SRH a few games back. While chasing a target of 160 plus, CSK were struggling to 42 for 4 with Dhoni in the middle. Nonetheless, Jadeja and Dhoni fought hard to take the game deep. Well, in the process, Dhoni panted and coughed in the middle. Much so, Dhoni couldn’t bare the hot and humid conditions in Dubai. Eventually, CSK lost the game by seven runs. Soon after the match, Irfan Pathan posted a cryptic tweet surrounding MS Dhoni. “Age is just a number for some and for others a reason to be dropped,” tweeted Irfan while seemingly taking a dig at MS Dhoni.

The tweet didn’t go down well with the fans as the all-rounder received a lot of flak for his tweet. “Sirf Do line mein sir ghum gaye, puri kitaab padhne par chakkar bhi aaega,” tweet Irfan while responding to his critics.


Translated into English, the tweet means: Only two lines created such havoc on social media what if I had written an entire book on it.

Irfan Pathan’s first tweet was surrounding the fact that he has been dropped from the team quite a few times. And, more so, the reason has been his growing age. Pathan is known to complain about being falsely dropped from the team on the accounts of his growing age. Pathan last played a T20I game for India in October 2012. Since then, he hasn’t been a part of the Indian team.

Talking of MS Dhoni, he recently announced his retirement from international cricket after being away from it for long. Thus far in IPL 2020, MS has struggled with the bat and somewhat with his fitness levels. He has failed to get the right timing with the bat. Nonetheless, with CSK back to their winning ways, Dhoni will hope to regain his Midas touch.