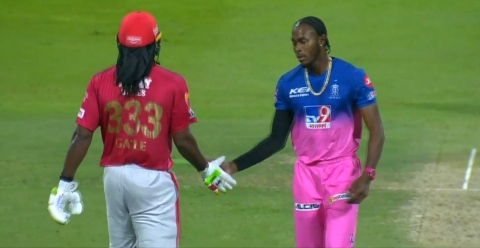 Jofra Archer, who is known for his fiery bowling, is also widely celebrated for his exceptional prediction skills. His Twitter handle is a testimony to it. There have been numerous instances where his tweet from the past has taken Twitter by a shock. Be it IPL or any other format of the game, Archer’s tweets come out to be true as predictions.

Jofra Archer yet again strikes gold with his prediction

One same thing happened in yesterday’s game between KXIP and RR. Jofra’s tweet from the past resurfaced the internet as the fans found his prediction quite astonishing. The tweet went viral after Archer dismissed Chris Gayle while denying him yet another century. Jofra’s tweet read, “I know, if I was bowling, I know he wasn’t getting da 100.” The tweet dates back to Feb 2013. Fans were quite astonished by Jofra’s prediction. Twitter got united to hail Jofra’s bowling as well as his prediction skills.

Talking about the game, Steven Smith called it right at the toss time and decided to bowl first. RR made an exceptional start as Jofra got the better of Mandeep Singh in the first over itself. He overplayed Mandeep with a sharp bouncer as Stokes’ excellent catch sent him back in the dugout. Nonetheless, RR failed to capitalize on the start as Gayle got dropped on the score of 10. Besides, Gayle and Rahul’s partnership put KXIP in a strong position. On the back of Gayle’s 99, KXIP put up a total of 180-plus for RR to chase.

KXIP’s win would have sealed them a spot in the top four. Nonetheless, RR had different plans for them. Stokes and Uthappa opened the innings for RR. They went off to a great start as Stokes scored a fiery fifty in the powerplay. However, Jordan got better at Stokes to send him back in the pavilion. Samson along with combined efforts from Smith, Uthappa, and Buttler sealed the chase for RR.