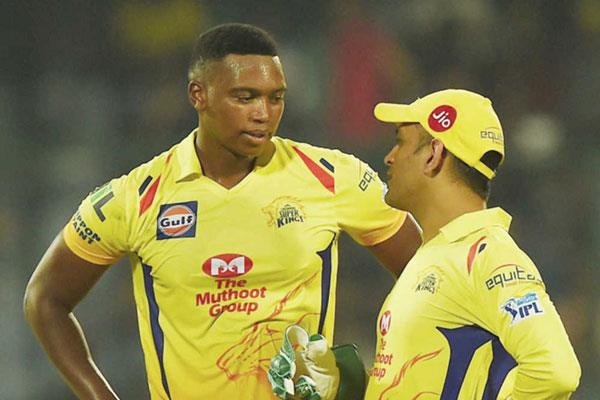 3-time champions Chennai Super Kings’ (CSK) 2020 IPL campaign is turning rather pear-shaped. Across their six group stage matches, the team has only managed to win two games so far. Their latest 10-run defeat against the Kolkata Knight Riders was particularly disappointing and has opened an entire can of worms for the team and it’s misfiring batting unit to address.

But it seems some of their problems have managed to follow them outside of the field as well. Based on some social media posts, it seems that their South African fast-bowling import, Lungi Ngidi, isn’t too happy with how CSK has been treating him. Further, some fans have speculated that Ngidi is planning to move out of the franchise in the recently announced, upcoming mid-season transfer window.

On Friday, Ngidi posted a rather cryptic tweet from his account. “There’s a lot of bad things that they wishing on me,” his statement read. It is still unclear as to what the context behind his original message was; some have suggested that the tweet was targetted at people who recently harassed him for his stance on Cricket South Africa’s Black Lives Matter campaign.

Others have implied that the message was simply an excerpt from rap-artist Drake’s hit song, “God’s Plan”. Interestingly, some of Lungi’s latest tweets have been based around pop song lyrics, so there is some relevance to that particular line of thought.

There’s a lot of bad things that they wishing on me.

Well, regardless of what his tweet’s original message was, the subsequent reaction(s) to the tweet is what has got fans wide-eyed. User @ImAbhishek7_ dropped a comment that said, “You deserve a better IPL team bro”. A seemingly harmless comment, which shouldn’t have stirred much attention if any.

Lungi, however, made a really surprising move on his part by liking the aforementioned tweet! 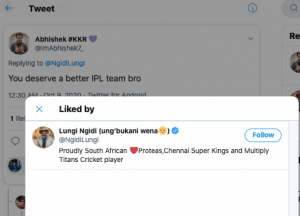 The CSK management is yet to comment on the situation, but from the looks of it; it seems quite evident that Lungi isn’t too happy with his team and is contemplating on applying for a transfer. That decision, however, is two-fold. Lungi will require a No Objection Certificate (NOC) from CSK before he becomes eligible to represent any other team.

Should these talks of Lungi’s transfer be genuine, the CSK management has a tough decision ahead of them. Lungi played a major role in the team’s 2018 title-winning season where he picked 11-wickets from 7 games. A side-strain ruled him out of the following 2019 edition last year. But he is available this season and also featured in the team’s opening two matches. His records haven’t been much impressive this season, though, which prompted the management to drop him from the side.

CSK play their next match against the Royal Challengers Bangalore (RCB) on 10 October at the Dubai International Stadium. Both teams will be eager to add two points to their tally and advance to the points table’s upper half.