IPL 2020: This batsman could be tried as a replacement for Suresh Raina according to Shane Watson 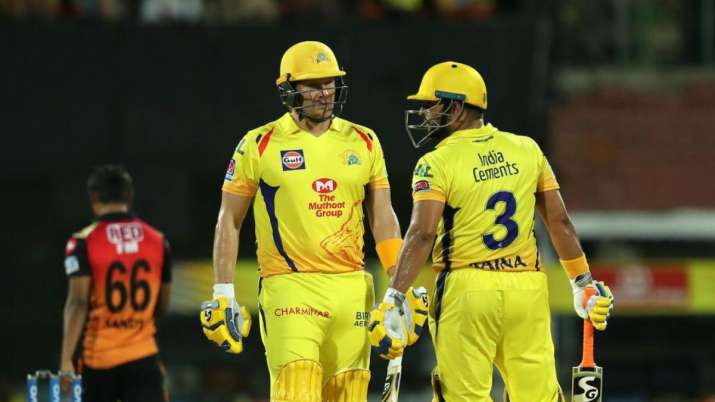 The exit of Suresh Raina from IPL 2020 came as a shock to the team and the fans alike. The seasoned campaigner cited personal reasons for the exit. As if it was not enough already, CSK’s most experienced bowler Harbhajan Singh also decided to pull out from the tournament this year due to personal reasons.

Earlier, CSK camp was jolted when 13 members of the franchise were tested positive including two players. The three-time champion team is going to start their campaign against the defending champions Mumbai Indians on 19th September in the league opener. However, it is interesting to note that the team has not yet named any replacements for Raina and Harbhajan.

The 13th edition of the Indian Premier League is just a week away and all the teams are sweating it out in the training camps currently. All the players are making sure that they are in the best shape before the tournament begins. The CSK camp has been going through ups and downs lately, but according to Watson, the team is balanced enough to deal with the ongoing crisis.

Raina is the highest run-getter for the team and replacing him is not easy. He has been an indispensable part of the franchise for so many years. “We have to (deal with the absence of Raina, Harbhajan). The great thing with CSK, as with all IPL squads, they have a lot of depth. It’s going to be incredibly hard to replace Suresh Raina. You can’t. He scored the second-most runs in the IPL, played the most games in IPL history. He has got records left, right and centre,” Watson was quoted saying on a YouTube show.

“He is going to be hugely missed, knowing the conditions in the UAE is hot, more chances of wickets being drier and turning a bit more. Raina plays spin incredibly well as well,” he continued.

Watson has been a part of CSK camp for the last two seasons and has enjoyed his time being with the franchise. According to him, the absence of Raina will give a chance to Murali Vijay. Vijay hasn’t performed to his potential for the team and scored 76 runs in the last three games he played for the team in two years. This could be a great opportunity for the stylish Indian batsman.

“No doubt Raina is a big loss but we have got someone like Murali Vijay, who is a gun player. In T20 cricket, he has not got a lot of opportunities in the last few years, but he is a seriously good batsman. He was sitting on the sidelines last year, he might more opportunities this year,” said Watson.

As for Harbhajan’s replacement, Watson expects Piyush Chawla to deliver with the ball as CSK starts their campaign. “Harbhajan, of course, has done incredibly well for CSK in the last couple of years. But again, on the other side, there is going to be opportunities for someone like Piyush Chawla who has come over from the Knight Rider. Of course, their experience and quality is going to be missed but you have got to make the most of the situation,” Watson added.

The fans are eagerly waiting for their favourite stars to light up the field with their presence. IPL is going to be a great relief for everyone as people have been in the lockdown for almost 5 months, devoid of any cricketing action.