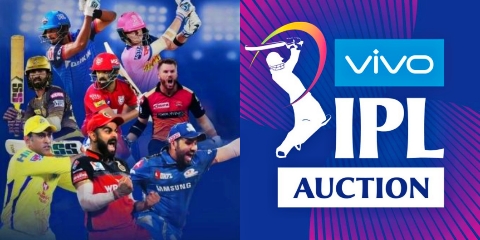 The 14th edition of the Indian Premier League is now 2 and a half months away. Players to go under the hammer this month. Fans eagerly want to know that IPL auction 2021 will be on which channel and date. Then remind you, the mini-auction is going to take place on 18 February this month in Chennai. A total of 292 players will go under the hammer.

Also, the viewers can stream the event on the Hotstar app. Jio users can enjoy the IPL auction live on the Jio TV app. Also, the video clips of the event will be available on IPL’s official website. The auction will commence at 3:00 PM in India but the preview show will start at 2:00 PM where the likes of Gautam Gambhir, Aakash Chopra, Ashish Nehra will analyze the event.

Ahead Of The Event

292 players will eye an IPL contract this Thursday. 8 franchises will look forward to strengthening their squads. Kings XI Punjab who changed their name to Punjab Kings has to spend at least 31 crore on a maximum of 9 players. Steve Smith, Glenn Maxwell, Dawid Malan will be big players to look out for this auction.

Dawid Malan is expected to get a big bid as the England batsman’s T20I record has been exceptional. Also, the eyes will be on former Rajasthan Royals captain Steve Smith. The Rajasthan franchise had parted way with former Australian captain after a long run. Two Indian players (Kedar Jadhav and Harbhajan Singh) are in the top bracket of 2 crore base price. So this auction is very crucial for players who have released a big number of players. The upcoming season of the cash-rich league is believed to start in April.