For celebrities, one of the many drawbacks of having a presence on social media is being at the receiving end of unethical hatred, abuses, getting trolled, or even being compared or labeled to terrorists, anti-nationals, and other non-receptive jargons. Cricketer Irfan Pathan recently was a victim of one such uncalled for expression on Twitter. Pathan was furious at a fan who called him ‘the next Hafiz Saeed’ – a Pakistani terrorist criminalized for his terror-related acts.

Social Media Comment Leaves Pathan Furious
A fan recently took to social media in comparing Irfan Pathan to Hafiz Saeed. And it didn’t quite go well with Pathan who was furious and completely shocked. The fan was reasoning with Pathan revealing that ‘Greg Chappel’ wasn’t the reason for his failures in international cricket. In response, Pathan replied –  “This is the mentality of certain people. Where have we reached? Such comments are not something that people would want to be associated with. Something that Pathan questioned about through his response – ‘Where have we reached’?

This is the mentality of certain ppl. Where have we reached ? #shame #disgusted pic.twitter.com/nlLh9vTwS6

Fellow Celeb Back Pathan
Actress Richa Chadha was one to reach out to Pathan in comforting him to leave aside such comments. Baseless accusations like these are all but aimed to tarnish someone image. 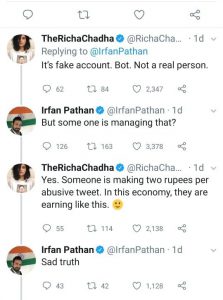 Pathan’s Role In The Team
During his playing days, Irfan Pathan, a talented allrounder was regularly been used to the best of his prowess. From batting up the order to even stifling opponent with his lethal swing bowling. Pathan credits his success to seniors (his then captain Rahul Dravid and Sachin Tendulkar) who identified his potentials. On his failures, Pathan made it clear that no person should be blamed for it. One of his tweets in this context read – “It’s unfair to blame Greg Chappell for spoiling my career.” This came in view of recent comments over Greg Chappell’s under-achieved and controversial tenure as coach of the Indian Cricket Team.