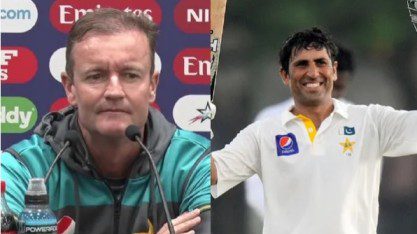 They say it’s the coach who brings out the best in his players. Channeling talent in the right direction and boosting performances go a long way in defining the role of a coach. The Pakistan cricket team has over the years recruited a number of top names that have managed their players; Zimbabwean Grant Flower being one of them. Flower was the batting coach of the team from 2014-19, overlooked by Mickey Arthur. Recently, Arthur opened up on an horrifying incident in which former skipper Younis Khan literally held a knife to Grant Flower’s throat

The Horrifying Incident
It was the Brisbane test of Pakistan’s tour to Australia in 2016. Younis Khan had just returned back to the pavilion without troubling the scorers. Step in batting coach Grant Flower with a bit of batting advice. Khan, already upset over his dismissal was in no mood for any advice and was in completely disagreement with Flower. Arthur said that’s when Younis lost his cool and brought out a kitchen knife to Flower’s throat. It’s an horrifying sight to witness in the dressing room,

Younis Shines In The Second Innings
Leaving behind his first innings dismissal and the incident with Grant Flower, Younis Khan went on to score a fifty in the second innings. Mickey Arthur, the then coach who had separated the two during the incident reflected on how he calmed Younis down and managed to get his focus back. Which rightfully resulted in a 65 run knock in the second innings.

For as calm a player Younis Khan was known, he did manage to leave behind the incident and carry on with his game. Moreover, being a senior player in the side, he got along well with Grant Flower thereafter. Probably it was the advice that worked.