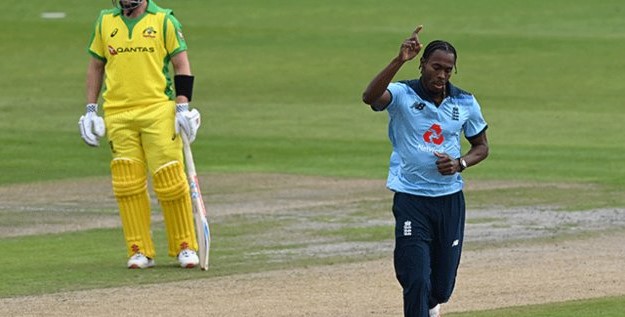 Jofra Archer is making it a habit to bowl jaw-dropping deliveries to make us all go ‘wow’. He has been in great form in white-ball cricket and is continuing his dominance in the ongoing ODI series against Australia. The pace with which he is bowling is just amazing to watch. His spectacular bowling was on display once again in the second ODI.

Archer has proved to be a troublemaker for the star Aussie batsman David Warner and the stats speak for themselves. Warner has faced Jofra Archer in 11 innings overall, where he faced 76 deliveries scoring 57 runs, but what’s startling is that Archer has got the left-hander 7 times.

However, in the second ODI it was Marcus Stoinis who had to tackle the raw pace of the English bowler. Archer has proved to be a great revelation for the English team and he is just rising up the ladder with his brilliant performances. The display of his accurate bowling in the second ODI against Australia is another confirmation of Archer’s ability as a bowler.

Stoinis faced a ripper by Archer in the eighth over of the second innings. England was defending a rather small target, hoping for a good start with the ball and Archer delivered it with an unplayable delivery to Stoinis.

Archer ran in and bowled a bouncer to Stoinis at his chest height, which the batsman tried to keep down, but owing to the brute pace of the delivery messed it all up. The ball took the edge off the bat and went up in the air, with Buttler taking an easy catch behind the stumps.

How do you play that? 😳 #ENGvAUSpic.twitter.com/YTj3LMZlvL

It was a do or die match for England and the English bowlers delivered it and how! England put up a small target of 232 for the Aussies and after the end of the first innings, the score looked easily achievable. However, England bowlers were not ready to give up that easily. With the help of a great bowling performance, England won the match by 24 runs and levelled the series at 1-1.