Recently, the English pacer took to Twitter and wrote that he would never get a dog from the UK again. 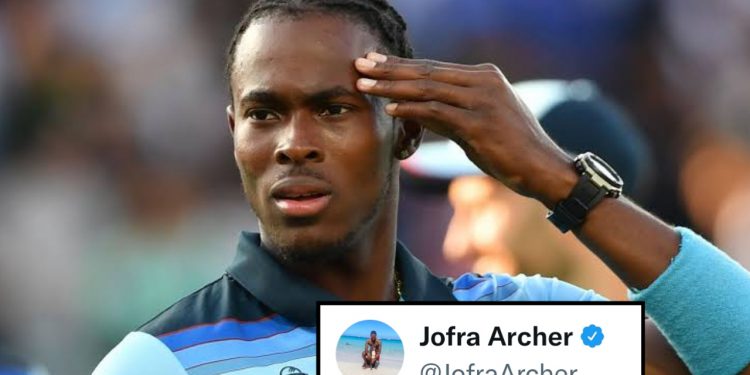 Cricketers all around the world find it quite interesting to engage themselves on online platforms and Jofra Archer is indeed one of them. The right-arm pacer has been a trended topic on Twitter many times recently.  Jofra Archer is considered to be a cool and composed person when it comes to Tweets and has a pretty good hand at dealing with the trolls in a great way.

The English right-arm pacer has been out of the game for a long time due to his injury and though he had no chance of playing in IPL 2022, he was auctioned at the IPL 2022 mega auctions and was bought by the Mumbai Indians for a whopping 8 crore. In a chat with MI, Jofra has confirmed that he will be available for the next edition of the Indian Premier League and can’t wait to play for the MI-paltan.

Recently, the English pacer took to Twitter and wrote that he would never get a dog from the UK again.

Never getting a dog from the uk again

While we don’t know the context of his tweet, regardless of the fact that he is a huge dog lover, an online user used it to poke fun at the cricketer.

The online user wrote, “MI bought one for 8 cr” with laughing emojis.

MI bought one for 8cr.

Jofra is considered to be a calm guy and here’s how he responded:

“I hope you get the love you deserve one day” and we really don’t need to mention that this is the best way to silence a troll.

I hope you get the love you deserve one day https://t.co/46Ap6aO4JO

In terms of MI, the five-time title holders are having a very bad run in the IPL 2022, resting at the bottom of the points table with only three wins in 12 matches. What’s more intriguing is that the two most prominent teams (Chennai Super Kings and Mumbai Indians) are ranked ninth and tenth, respectively, while the two new IPL teams (Gujarat Titans and Lucknow Super Giants) are ranked first and second.