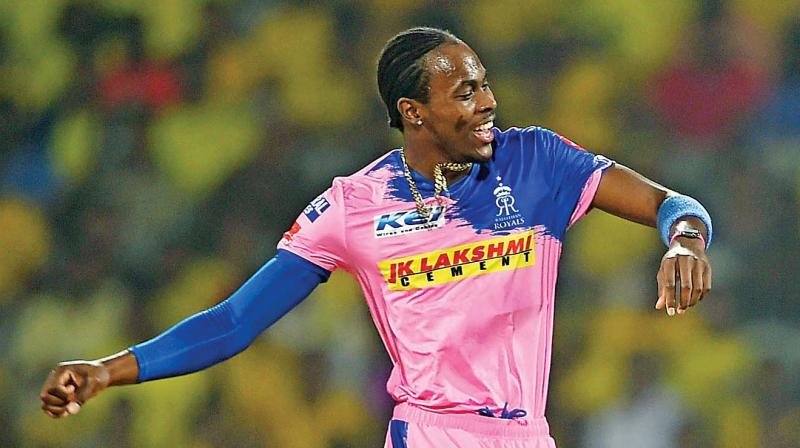 Mumbai Indians’ clinical show continued in their match against Rajasthan Royals on Tuesday. MI won their third game on the trot securing the first position on the points table with 8 points. The team has a better NRR (net run rate) than Delhi Capitals who also have 8 points. One of their most trusted players has been Hardik Pandya who always delivers for his team with his all-round performance. The all-rounder was stunned by a scary beamer from Jofra Archer clocking 152kph.

It was a pretty much one-sided game at Abu Dhabi which was solely dominated by Mumbai Indians. Rajasthan Royals didn’t have any answer to MI’s performance which eventually led them to lose the match by a big margin. However, Jofra Archer bowled in his usual manner and troubled the MI batsmen, Pandya and Suryakumar Yadav in particular.

It was in the 19th over of the MI inning when Archer was bowling to Hardik Pandya and the ball slipped out of his hand. It went straight into the direction of Pandya’s head who did well to duck under it, escaping a potential injury. The ball bounced just in front of the wicketkeeper Buttler who couldn’t stop the ball either. Archer immediately raised his hand up apologetically.

In the same over, Archer bowled a fiery bouncer to Suryakumar Yadav which hit him on his head. The batsman was shaken and was checked for concussion by the physio. There was no serious injury and the batsman continued and hit Archer for a six the next delivery. Stuart Broad reacted to the delivery bowled to Hardik Pandya. He wrote, “He’s played that brilliantly. I don’t think any bowler ever means these…”.

Here is the Video (Archer Beamer To Hardik)

A win for Mumbai meant Rajasthan Royals suffered their third straight loss in IPL 2020 and are at the 7th position on the points table now. They have won only two of their five matches and need to perform better in order to make a case to make it to the playoffs.