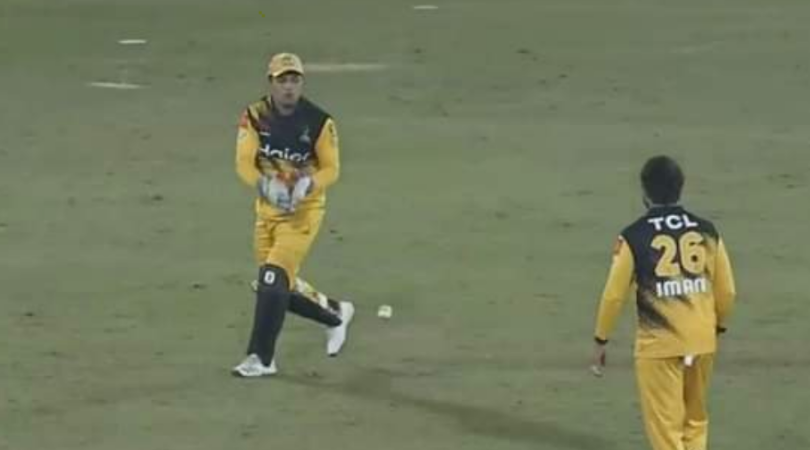 Pakistan cricketer Kamran Akmal is once again in the headlines as he becomes the butt of all jokes on social media thanks to yet another blunder from him on the cricket field. Actually, during the 18th match of the ongoing season of Pakistan Super League (PSL), Peshawar Zalmi’s wicketkeeper Akmal dropped an easy catch for which he has to face some heat from the fans on social media.

It all happened on the penultimate over of the Quetta innings when the game already was in the favour of Peshwar Zalmi., but still, Peshwar’s wicketkeeper made funny viewing scene for the fans. This not for the first time that Kamran Akmal is in the news for his hilarious activity. Earlier in the previous year, he has been involved in picking up bizarre all-time playing-11 as included himself in the team.

The video of Akmal’s dropped catch in the 18th match of the ongoing season is making rounds on the internet. The video of the incident has been uploaded by the official twitter handle of Cricingif. They have shared the video with the caption, “KAMRAN AKMAL PUTS DOWN ANOTHER ONE Sohail Khan managed to hit it high up into the night sky but Kamran Akmal couldn’t take it.” Here we are attaching the video of the same at the below of this article.

The former Pakistan cricketer is currently having a good time with the bat in the ongoing season. But because of his poor wicketkeeping, the fans are continuously trolling him over the internet platform. Kamran Akmal’s catch drop in the ongoing season has made fans reaction to the next level. With trolls coming from left, right and centre, berating the Peshawar man for yet another blunder with the gloves.

How is this guy still picked as a keeper?

Surely this has to be investigated…..he does this nonsense so so often.