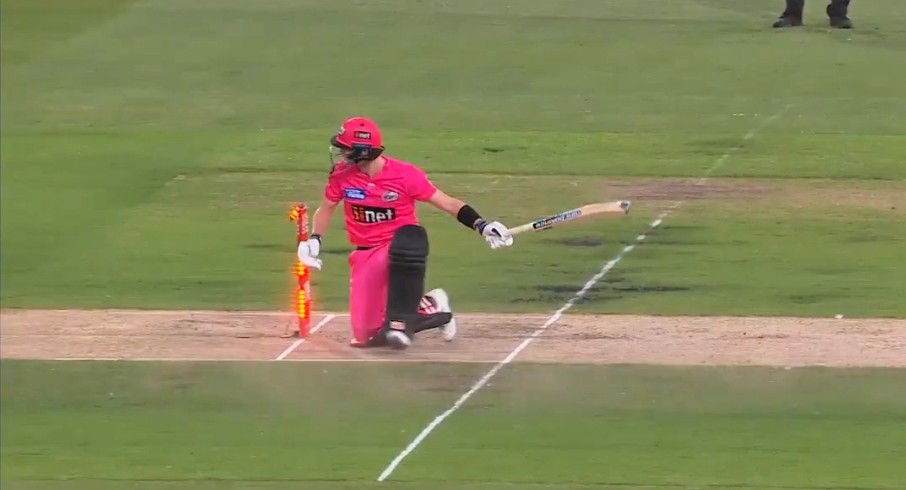 The 9th edition of KFC Big Bash has come to an end. Currently, the teams which ended the league stage at the top 5 positions are playing play-off matches. Today, Melbourne Stars and Sydney Sixers are face to face Qualifier match. The winning team will directly qualify for the final.

After winning the toss, Melbourne Stars skipper Glenn Maxwell invited Sydney Sixers to bat. Steve Smith came to bat at one down after the end of the 47-run partnership between Josh Philippe and James Vince. During the 8th over of the match, Steve Smith was presumed to be hit-wicket, the bowling team even started celebrating the wicket. But the replay showed a different story.

It all happened when Steve Smith ducked a nasty bouncer of Harris Rauf. But he lost his balance and fell in the direction of stumps. At the same heavy wind in the ground blew the bails off the stumps. It appeared that Smith had touched the stumps. But replay showed that the bails have fallen because of the wind and Smith never touched the stumps.

Hit wicket? Don't think so! 🙊
The wind has just had a go at getting Steve Smith out! 💨

Later, in the 13th over Steve Smith lost his wicket after scoring 24 off 18 deliveries. Sydney Sixers could post a target of 143 to the hosts Melbourne Stars. Adam Zampa picked three crucial wickets of James Vince, Steve Smith and Sean Abbott. When this article was posted Melbourne was playing at 14 runs without losing any wicket at the end of two overs.

The winner of this match will qualify for the final match while the loser will have one more chance to qualify for the final. The losing team of Qualifier will play in Challenger with the team which will win Eliminator. Sydney Thunder and Adelaide Strikers will play Eliminator tomorrow. The Challenger and Final of KFC Big Bash are scheduled to play on 6 and 8 February respectively.