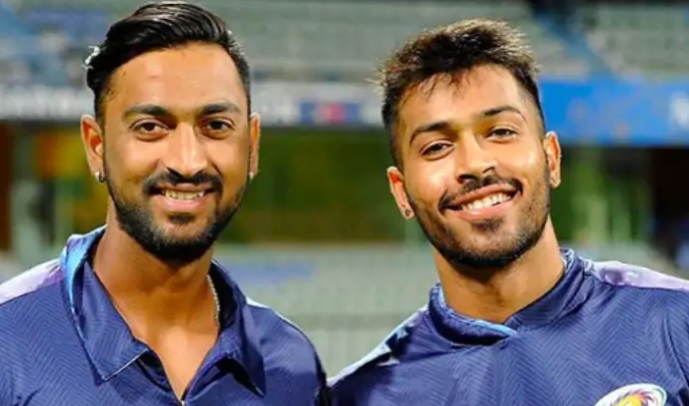 The Pandya brothers – Krunal and Hardik have become quite an household name over the last few years with their sheer performances at the Indian Premier League (IPL). Both brothers play for the Nita Ambani-owned franchise, the Mumbai Indians. Recently, Krunal Pandya took fans back to the early days of his cricketing career by sharing a video of his very first TV interview; one which brother Hardik termed as ‘Gold’.

Krunal’s First TV Interview
Krunal and Hardik Pandya have come a long way. Their early days of hard work and struggle paid dividends when both brothers earned IPL contracts with the Mumbai Indians, and further more, a call up to the national team across the three formats of the game. While Krunal features in the shortest format -T20, Hardik is a regular in all three formats. In a throwback video posted recently, Krunal can be seen as a youngster giving his first ever TV interview.

Throwback to the #PandyaBrothers' first ever interview 😄 Just young kids with big dreams 😊 If we can make it, anyone can. Just work hard to achieve your dreams 🇮🇳 @hardikpandya7 pic.twitter.com/F66ucAdHVQ

Reward Of Hardwork And Dedication
In the video, Krunal shares the belief and passion that both he and his brother possessed in playing for the national team. If  you work hard, you’ll be rightfully rewarded, expresses Krunal. Not getting carried away with the success they’ve garnered, he did stress on how they were two young kids but with a dream to make it big. And if they could, then anyone can. You just need to have the self belief. Just work hard to achieve your dreams, he added while also tagging his brother to the post.

Hardik’s Priceless Response
“This is gold my bro to see now,” was a priceless response by Hardik Pandya on his brother’s post. The video brought back memories of their early days. In no time was the video posted, it gathered a large number of likes and shares, most of their fans even complimenting the brothers for their success.