Pakistan required two runs off the last ball when Mohammad Nawaz was cleaned up by Mahmudullah. 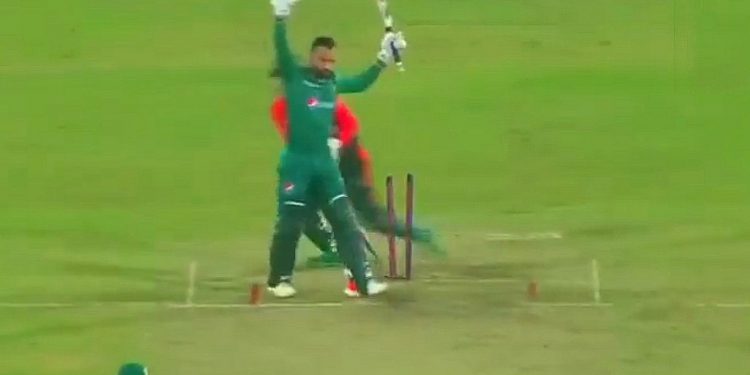 Surviving through some nervy moments in the 3rd T20 int’l against Bangladesh, Pakistan have managed to win clean-sweep the series 3-0. However, the series was much closer than what this bland scoreline suggests.

While the second match of the series was indeed a one-sided affair, the 1st and 3rd game went right down the wire. In the first game, Bangladesh had dominated Pakistan for the first 36 overs of the game. However, Shadab Khan and Mohammad Nawaz managed to snatch the game with their death-over heroics. The third game was similar too, but much more controversial.

With eight wickets in hand and just eight runs required off the last over, Pakistan should’ve been through easy-peasy. However, Mahmudullah Riyad decided to bowl the last over himself and took 3 wickets within the first five balls, conceding just six runs. Equation came down to Pakistan needing 2 runs off the last delivery. The real drama begun to unfold.

Came the last ball and Mahmudullah Riyad cleaned Md. Nawaz off a full-ball aimed at the sticks, successfully disturbing his furniture. However, Nawaz wasn’t ready. He had pulled out last second. The umpires declared it a dead-ball and there was chaos all over the stadium.

Riyad discussed the move with Nawaz and accepted his reasoning. He had to bowl again, and he did. Regardless, this time Md. Nawaz was ready. Dancing down the track, he creamed Mahmudullah’s delivery over covers for a boundary. Pakistan prevailed once again. Here’s the whole video.

The last ball drama!!
Congratulations #Pakistan for the #PakWash and best wishes for #Bangladesh. Although Mahmudullah performed well, BCB has a lot to do for real progress.#BANvPAK #PAKvBAN #BrotherhoodWon pic.twitter.com/kWGEeSjW3W

Following the controversial loss, Mahmudullah took the matter to the umpires and eventually, he seemed okay with the umpire’s decision. Here is Riyad’s full statement: “I just asked the umpires whether it was a fair ball or not because Nawaz pulled out late. I just asked about this to the umpire. Nothing else. Umpire’s call is final and we do respect them. It is little heartbreaking. We went close but unfortunately, it [the win] did not happen.”

ALSO WATCH: Shaheen Afridi hurts Bangladeshi batter with his ferocious throw after being hit for a six

Pakistani all-rounder Mohammad Nawaz also clarified why he pulled out so late. “I stopped and pulled out because i was still looking down when he released the ball. Saw the ball only after it had already come halfway down the pitch. That is the only reason i pulled out,” said Nawaz in a bid to explain his late pull out which cost Bangladesh the match.