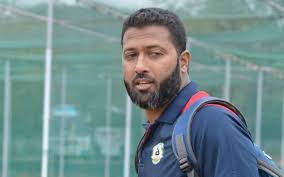 Sanjay Manjrekar made headlines once again as he expressed his annoyance on picking players like Ravindra Jadeja in the team after India’s loss in the first ODI against Australia. He told The Hindu how a player should be picked on the basis of fulfilling one discipline properly; be it batting or bowling. Ravindra Jadeja tweeted an ambiguous message after Manjrekar’s comments and now the legendary domestic batsman Wasim Jaffer has taken a sly dig at the commentator.

Jadeja found himself at the receiving end during the 2019 World Cup as well when Manjrekar called him a ‘bits and pieces’ player. Jadeja had reacted to the comment rather furiously asking the former India cricketer to stop his ‘verbal diarrhoea’. Manjrekar’s yet another comment on Jadeja just shows how he is not very fond of cricketers like him.

Manjrekar even went on to say that even Pandya won’t be a part of his team stating that players like him add ‘illusionary value’ to the team. However, Manjrekar was proved wrong as both Jadeja and Pandya performed extremely well throughout the ODI series, especially in the third ODI which India won.

The duo of Jadeja & Pandya was instrumental in India’s win in the third ODI, adding 150 runs to the score and taking India to 302 which at one point looked impossible. Both Pandya and Jadeja were unbeaten till the end scoring 92* and 66* respectively. Pandya was even adjudged Man of the Match for his brilliant knock.

The star domestic batsman Wasim Jaffer looked very impressed and appreciated everyone on and off the field in an amusing way. He tweeted a funny message trolling Sanjay Manjrekar. The post read, “While we appreciate those who contributed on the field let’s not forget the contribution of those working off the field too like my good friend @sanjaymanjrekar.” He ended the tweet with the wink emoji.

In the meantime, team India is gearing up for their next challenge as the T20I series starts from Friday. After losing the ODI series, Virat and his boys will be definitely eyeing the T20 trophy.