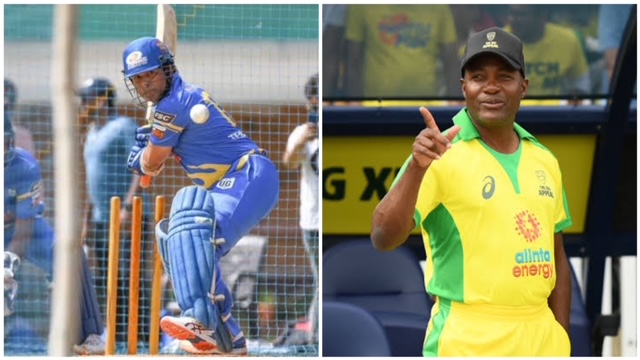 Earlier in 2020 because of Covid 19, the first edition of the Legends Road Safety World Series was called off after four matches and now the cricket tournament is schedule to resume from March 2, 2021. On February 9, organisers of the highly anticipated tournament have announced that all the remaining matches of the legends series will be going to play in the newly built Shaheed Veer Narayan Singh International cricket stadium, situated in Raipur.

According to media reports, the Legends Road Safety World Cricket Series Tournament is all set to schedule between March 2, 2021, to March 21, 2021. The tournament will feature the old big star players such as Sachin Tendulkar, Virender Sehwag, Brian Lara, Muttiah Muralitharan. There will be five teams; India, Australia, Sri Lanka, West Indies, South Africa in this series.

“An array of stars including Sachin Tendulkar, Virender Sehwag, Brian Lara and many more legends of five cricket playing nations- Australia, South Africa, Sri Lanka, West Indies and India – will be back in the field to recreate the magic of old in the annual T20 cricket tournament, organised to create awareness towards road safety in the country,” a media release said.

“As cricket is the most followed sport in the country and cricketers are looked upon as idols, this league aims to influence and change people’s mindset towards this behaviour on the roads”, it added.

Also Read: Top 5 Most wicket-takers  for India in test

Fans were eagerly waiting for this moment and continuously searching on the search engines about the update on this tournament for a while. And now good news came up for the fans, as the Road Safety World Series 2021 is all set to resume from March 2 and the tournament will be concluding on March 21, 2020.