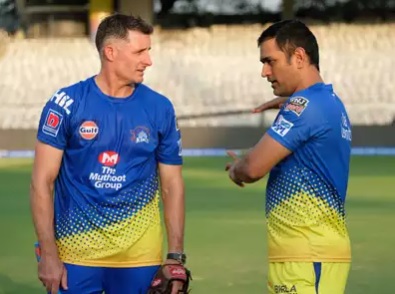 Former Australian batting star Mike Hussey (aka ‘Mr. Cricketer) is a renowned figure on the international as well as global domestic circuits. His calm batting potential suited him a batting role at any required position; which also credit to his achievements across all format. Post retirement, Hussey took up the role of batting coach at Indian Premier League (IPL) based franchise, the Chennai Super Kings. However, Hussey did express of a time when his tip to MS Dhoni backfired and the Indian captain refused to take any batting advice from him thereafter.

Hussey’s Batting Tip Gone Wrong
It was at the 2018 season of the Indian Premier League that Mike Hussey was entrusted the role of batting coach of the Chennai Super Kings, the franchise which he also represented during his playing days in the IPL. While expressing his views on ‘Lessons Learnt with the Greats’ podcast, Hussey revealed of a time when his advice to a top Indian batsman didn’t work out well.

It was before the qualifier game against Sunrisers Hyderabad, where Hussey had analysed opposition leg spinner Rashid Khan’s a potential threat to the CSK  batting line up. “The night before the qualifying final against Sunrisers Hyderabad, he (the analyst) sent me this split-screen of Rashid Khan. When he (Rashid) runs in to bowl, when he bowls his leg-spinner, he holds his finger wide as he’s running in, and when he bowls a wrong ‘un, (he bowls) with fingers like this.”, Hussey discovered.

Dhoni Loses His Wicket And His Cool
So what went wrong that Captain Cool lost his cool at Hussey. It was Dhoni’s wicket! Hussey’s tip after analyzing Rashid Khan’s bowling action had backfired, resulting in Dhoni getting out on the first ball he faced. Khan had cleaned up the CSK captain with a googly, which probably Dhoni had expected to be a leg spinner going away from him (as per Hussey’s tip). After losing his wicket, Dhoni walked straight upto where Hussey was seated and vented his frustration by saying, “I’ll bat my own way, thanks.”

However, as known for his calmness, Dhoni did walk up to Hussey later and cleared how wrong he was in not practicing and following up on the advice given by the batting coach.