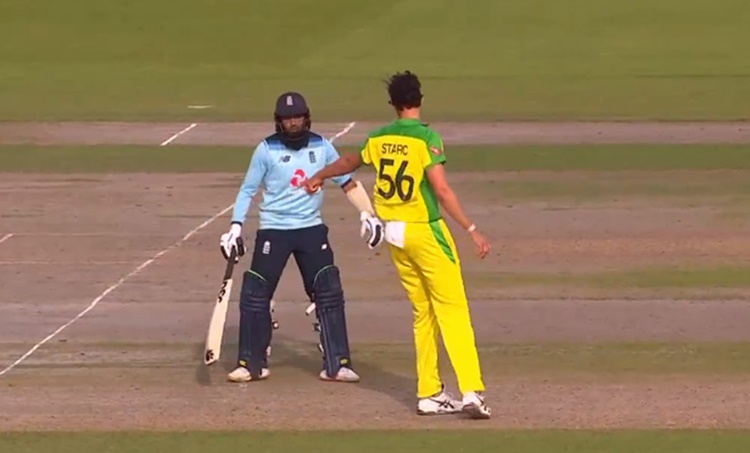 The ‘Mankad’ run out – a form of dismissal in which the bowler run outs the non-striker for backing out of the bowling crease before the ball is bowled, is back in the news. This time the  controversial form of dismissal was part of  the ongoing action in the ODI series between England and Australia. In the 3rd ODI, Mitchell Starc warned an over-backing Adil Rashid to stay in his crease and avoid been ‘Mankaded’.

Mitchell Starc Warns Adil Rashid
The incident happened during the 49th over of the England innings. Starc the bowler was in his stride to bowl when the non-striker, Adil Rashid had backed out of his crease. As  he approached the bowling crease, Starc saw Rashid had left the crease even before the ball was bowled. What happened next? Mitchell Starc simply let Adil Rashid go away with a warning to stay in the crease (and avoid getting ‘Mankaded’).

Fan Taunts R Ashwin Over Incident
As soon as Mitchell Starc let Adil Rashid off with a warning, fans heaped praises for the Australian’s sportsman spirit. Few even recollected last year’s IPL fixture in which Ravi Ashwin had controversially run out Jos Butler. The dismissal had sparked debates across the cricket fraternity with mixed reactions.

I believe in fighting the good fight but wait till the day after and I will get back to you on this. I would like to give a day to myself.🙏 https://t.co/2LJufUNAnX

A fan even reacted in asking R Ashwin if he had taken a lesson out of Starc’s book. Ever since he dismissed Butler, Ashwin has always been in the news when ‘Mankaded’ run outs are discussed. The spinner has backed the dismissal as he feels the batsman (non-striker) shouldn’t be backing out before the ball has been bowled.

Australia Win Record Run Chase; Clinch Series
Australia chased down England’s score of 302/7 in the 3rd ODI to clinch the three-match series 2-1. In a thrilling finish, Australia bounced back from losing half their side for a mere 78 and still emerge winners. The Australian chase was led by a record double-century stand between wicket-keeper batsman Alex Carey (106) and Glenn Maxwell (108). Although Australia lost the pair towards the end, enough damage had been done to see them through and clinch the series. Glenn Maxwell was named player of the match and the series for his all-round performance.

The talk though remains about Starc’s disciplined effort in not running out Adil Rashid. In a let-0ff which was just a warning, controversy surrounding the ‘Mankaded’ dismissals will continue to do the rounds.