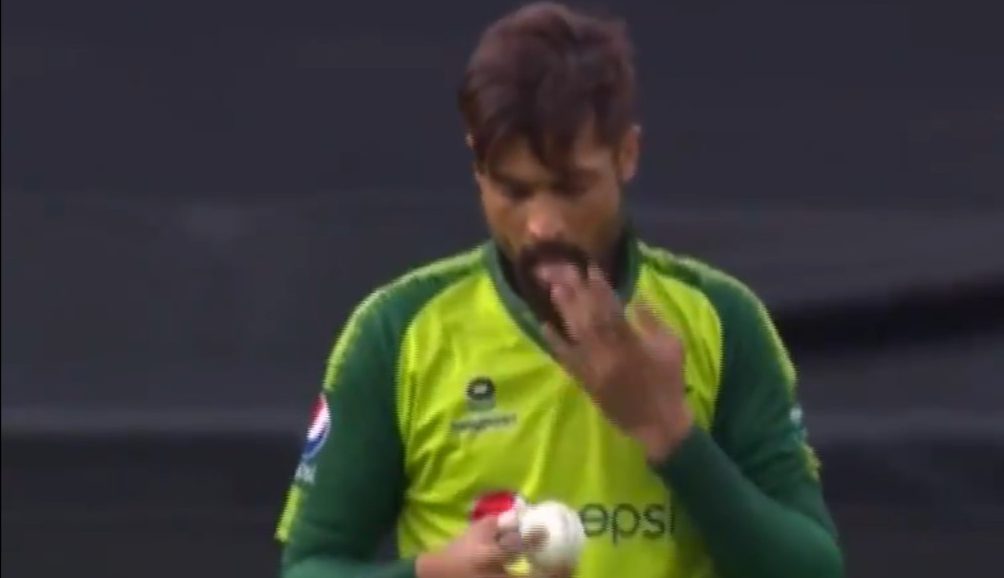 England is currently hosting Pakistan for 3 Tests and 3 T20Is. The Englishmen won the 3-match Test series with a scoreline of 1-0. Pakistan locked horns against England for the first match of the 3-match T20I series at Old Trafford in Manchester on 28th August, Friday.

Unfortunately, the T20I encounter – first for both the teams post the coronavirus scare – was abandoned with rains playing the spoilsport. However, something unusual happened during the game that caught the attention of fans around the globe.

Applying saliva on the ball is a common practice for the bowlers to make the ball dance in the air. However, with COVID-19 in place, the International Cricket Council (ICC) has set out certain rules on the same. Following the novel coronavirus scare, the international apex body restricted the use of saliva and made it a punishable offense.

The rule reads as “Players will not be permitted to use saliva to shine the ball. If a player does apply saliva to the ball, the umpires will manage the situation with some leniency during an initial period of adjustment for the players, but subsequent instances will result in the team receiving a warning. A team can be issued up to two warnings per innings. But repeated use of saliva on the ball will result in a 5-run penalty to the batting side. Whenever saliva is applied to the ball, the umpires will be instructed to clean the ball before play recommences.”

The T20I game abandoned due to rain

Talking about the match, the officials haven’t penalized Amir or per se the team as of yet. The Pakistani bowler had a decent outing in the game. Amir managed to bowl 2.1 overs in the game while giving away 14 runs before the rain kicked in.

Pakistan called it right at the toss and decided to bowl out Englishmen in the overcast conditions. Tom Banton was the player of the game for English as he scored a blitzkrieg knock of 42-ball 71. Imad Wasim was the pick of the bowlers for Pakistan as scalped two wickets in his quota of four overs. England seemed ready to post a mammoth target for Pakistan before the rain played spoilsport. The score read 131 for six at 16.1 overs.

Pakistan and England will face each other at the same venue for the second T20I on 30th August.