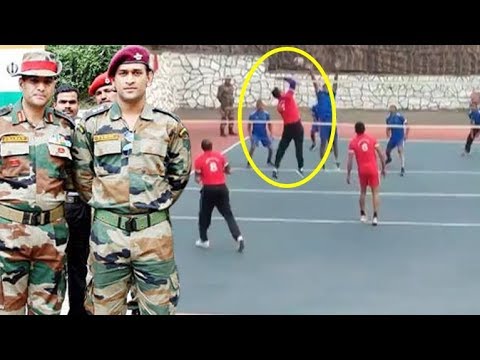 MS Dhoni is on a break from cricket and serving his army duty in Jammu and Kashmir. Dhoni is a Lieutenant Colonel in Parachute Regiment of the Territorial Army who joined the armed forces in Kashmir on 1st August and will serve till independence day.

Dhoni’s duties in the army are patrolling, guard and post duty. Meanwhile, several pictures and videos of Dhoni from army camps are surfacing on the internet. In one of the videos, Dhoni can be seen playing volleyball with the members of the army.

Here is an old video of Dhoni playing volleyball with army men in 2017.

However, after the 2019 World Cup Dhoni faced criticism and there were talks about his retirement and his place in the Indian team. Ahead of the West Indies tour team selection, Dhoni had made himself unavailable to fulfil his commitment of joining the army.

Former Indian Captain is not India’s first choice of wicket-keeper anymore. Now selectors are looking to groom Rishabh Pant and Dhoni will have the duty to do so. According to sources, Dhoni will turn up to Indian side in T20I series against New Zealand and South Africa in January-February 2020.

Now, Rishabh Pant has a good chance to be India’s main wicket-keeper for a long time. In short span of his career, he has done quite well. But we have seen most of the Pant in Test cricket and In the IPL. In limited-overs international cricket, Pant still needs to prove himself. Also, he has constantly faced criticism for his irresponsible stroke play throughout his career.