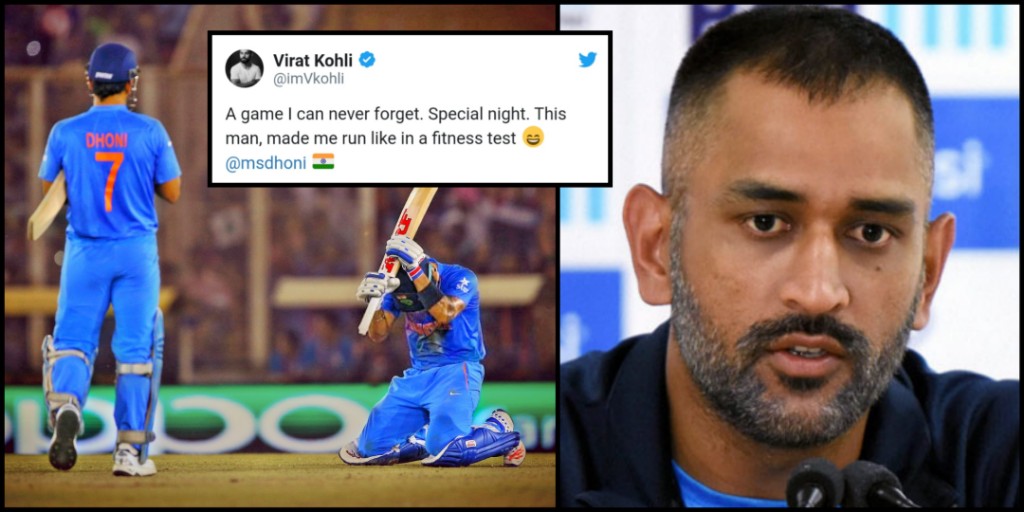 Currently, no one knows whether Mahendra Singh Dhoni will play for India again or retire anytime soon. However, today speculations of Dhoni’s retirement are sparking. The former Indian captain is out of the action after 2019 World Cup ouster. He had made himself unavailable for the 2-month long West Indies tour. Also, he is going to miss home T20 series against South Africa. However, he has yet to make a statement on his future with Team India.

Earlier, selectors have mentioned that they don’t want the special wicket-keeper to retire as they are seeing him as a mentor for youngsters like Rishabh Pant. Chief selector, MSK Prasad had said that Dhoni will be part of the Indian team during certain tours to guide Rishabh. But with remaining away from the team since World Cup, Dhoni has not been able to guide the 21-year old.

Amidst all this, Virat Kohli’s tweet has sparked MS Dhoni retirement speculations. Today, Kohli posted a throwback picture of his and MS Dhoni from 2016 T20 World Cup. Pic showing Virat on his knee after MS finished the match with a four. He wrote the caption, “A game I can never forget. Special night. This man (MS Dhoni), made me run like in a fitness test,”

A game I can never forget. Special night. This man, made me run like in a fitness test 😄 @msdhoni 🇮🇳 pic.twitter.com/pzkr5zn4pG

But Virat Kohli posting this picture all of a sudden has set the social media abuzz. Fans think that it is an indication of MS Dhoni’s forthcoming retirement. Also, some messages are circulating on social media that Dhoni has called for a press conference at 7 PM on Thursday where he will announce the decision of retirement. It is still not clear whether the news is true or fake as there are no official words yet. On the matter, BCCI has said that they have no intimation about Dhoni’s retirement. Here are some reactions of fans after the retirement speculations of World Champion captain.

Ah #Dhoni trending, Kohli remembering a match out of the blue, a match that took place on 27th March 2016. No rhyme or reason to bring it up now.

Don't think MS Dhoni will return to international cricket and we may not see him play for India again. Will be disappointing for fans but not shocking since the Dhoni we know hardly runs for glare and limelight , even in retirement , I expect him to smile and wrap things up.

Thala don't do this🙏😌

All we ask for is one Farewell match in India🙏🙄#Dhoni pic.twitter.com/vR9jyE8685

When someone spread negativity about Msdhoni's Retirement