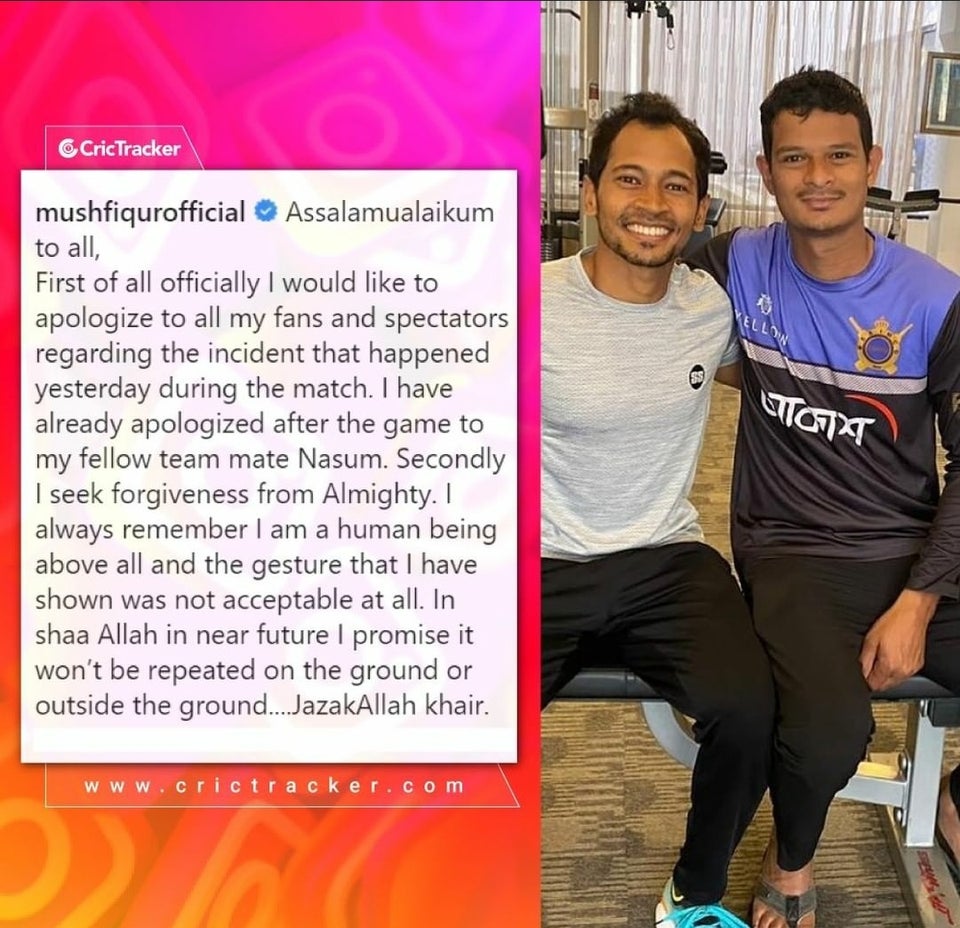 Bangladesh ‘keeper Mushfiqur Rahim recently copped much flak on social media, after a video of him reacting aggressively to a teammate went viral.

Mushfiqur, the Beximco Dhaka captain, looked quite on edge in his team’s eliminator match against Fortune Dhaka in the ongoing Bangabandhu T20 Cup. Defending just 150-runs, the Dhaka players had to be at the peak of their fieldsmanship to stay in the contest. And while they did eventually register a 9-run win, they had several sloppy moments on the field.

The likes of Al Amin Hossain and Yasir Ali, for instance, made a mess of some particularly easy chances. However, it was 26-year-old all-rounder Nasum Ahmed’s efforts- or lack thereof, that got Mushy to lose his cool.

In the 13th over of Barishal’s chase, Mushfiq and Naseem converged at the deep mid-wicket to field a single off Afif Hossain’s bat. But the Dhaka skipper wasn’t too happy that he had to run all the way up to that point from behind the stumps just to save the run. He let Nasum know about the same too, with an aggressive gesture, as is evident from this video:

Not only once, Mushfiqur did it twice 🤣🤣🤣 pic.twitter.com/zpSriYRYhY

Captain Mushfiqur threatens Nasum not once but twice

However, the video that broke the internet happened later, during the 17th over of Barishal’s innings. Afif, batting on 45, scooped the ball backwards over short fine-leg. And as luck would have it- Nasum, fielding at that position, was, yet again, on the verge of converging with his captain. Thankfully, he timed his run just in time to avoid a collision and Mushfiqur successfully collected the catch.

But on this occasion, the Dhaka captain was fuming mad! He had a look of sheer frustration on his face and actually threatened to punch his teammate. Thankfully, nothing untoward actually took place- but it took quite a bit of convincing from his teammates to placate him.

Calm down, Rahim. Literally. What a chotu 🐯🔥

The Bangladesh Cricket Board (BCB) took note of the incident and reprimanded Mushfiq accordingly. He copped a 25% match fee fine and a demerit point for breaching the Code of Conduct. The BCB’s official statement found Mushy guilty of “showing insulting gesture towards a teammate”. Three more demerit points to his name, and Mushfiq can face a potential one-match ban from tests.

Thankfully, it seems that the former Bangladesh captain has learnt his lesson and will improve his conduct in the future. On Tuesday, he made a post on his Facebook page apologizing to Nasum and his fans. He and Nasum also posed for a brotherly picture together. 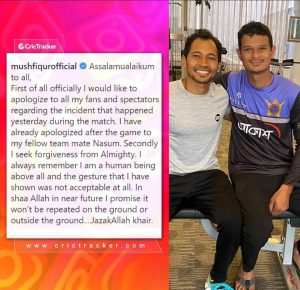