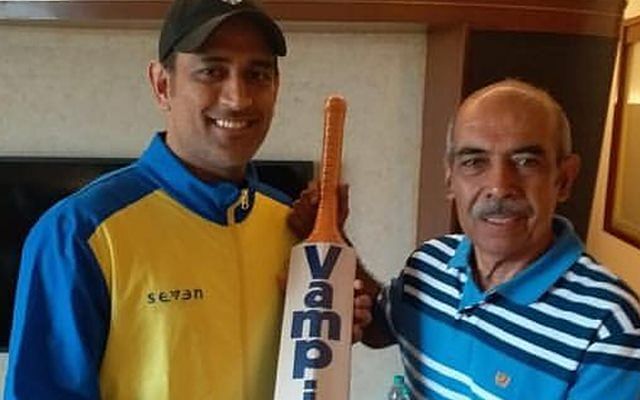 The ongoing week has been infused with a strong, ‘Mahi’ flavor, thanks to Mahendra Singh Dhoni’s shock retirement announcement. His fans and friends, from all wakes of life, have kept the fraternity abuzz with iconic stories and anecdotes; all revolving around the sensational, on-field life of the ex-captain. Somi Kohli, owner of the ‘Beat All Sports’ (BAS) cricket apparel company, recently added to those incidents by sharing some of his most, heartfelt personal experiences with MSD.

Mr. Kohli, during his interview with an Indian Express journalist, confessed that it took him a fair bit of convincing to recognize Mahi’s cricketing caliber. He recalled that Mr. Paramjeet Singh, one of BAS’ local-dealers, had to coax him for six-whole months to offer Dhoni a sponsorship. Born to a middle-class family in Ranchi, Dhoni faced his fair share of financial difficulties in procuring cricket-equipment. Paramjeet was one of the first persons who invested his faith in the young, Jharkhand-lad. Kohli did, too (how ironic!), after a fair bit of convincing; paving the way for BAS’ 22-year-long, proud relationship with Dhoni. Incidentally, this was also a theme portrayed in his biopic movie, MS Dhoni: The Untold Story.

“As a cricket manufacturing company, we always kept looking out for new talent. Our dealer Paramjeet Singh had been calling me consistently to tell about this young cricketer from Ranchi. After six months of him trying to convince me, I sent the kits to Mahendra Singh Dhoni in February 1998. Since then, we’ve shared a 22-year-long association. When I got to know about his retirement yesterday, I could not believe it first and could not sleep for hours. He has been a gem of a cricketer. We are glad that we could also play a part in his journey so far,” Mr. Kohli said.

“My wife asked, “Who is Dhoni?”. That made the Captain Cool lose his sleep”

Turns out, it wasn’t just Mr. Kohli who took some time warming up to Dhoni’s true abilities. Somi’s wife, Mrs. Manju Kohli, once had a conversation with him that, allegedly, made the Captain Cool ‘Lose his sleep’!

“In 2004, I first met him in Chandigarh, and months later, he came to Jalandhar to visit our factory. Dhoni stayed at my home and when I told my wife Manju Kohli, she asked, “Who is he?” The next day, when I met Dhoni, he told me he could not sleep for hours thinking about my wife’s words. A few months later, when he scored the century against Pakistan, and called us at 11 in the night. He asked for my wife and told her, ‘Auntie, main Dhoni.’ (T: It’s me, Dhoni). My wife told him, ‘Beta, now the whole world knows who Dhoni is.’ That was the bond we shared.”

Somi believes that Dhoni’s down-to-earth nature and gratitude make him Indian cricket’s most prized gem. “Last year, before the World Cup in England, Dhoni asked us for blue BAS logos. He already had deals from Sunridges and Spartan at the time, but he wanted to show his gratitude. He could have earned crores with those deals, but he still chose to acknowledge us. That makes him the Kohinoor of Indian cricket,” he concluded.