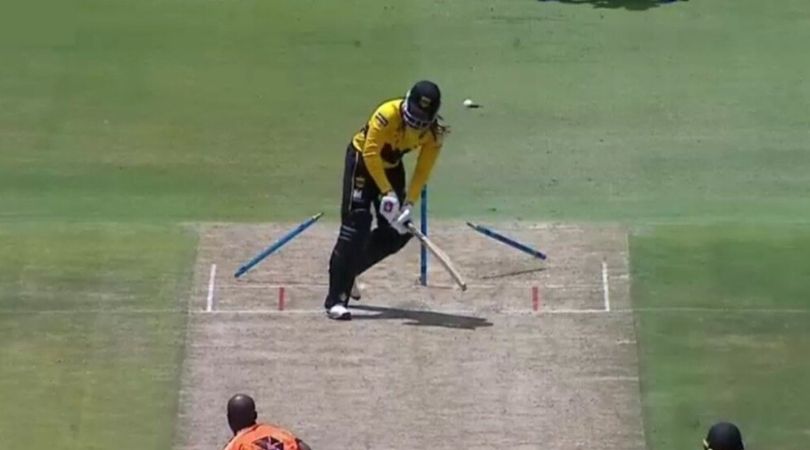 When Chris Gayle was dismissed he was at the score of 6 off 11 balls. It all happened in the fourth over of the innings when Gayle had no answer to an unplayable delivery from 29-year old Dala. The stumps flying in the air was the icing on the cake for the Giants’ fast bowler. It was one of the best yorkers ever had in cricket history.

Jozi Stars’ batsman could manage to score only 108 in 18.5 overs as they have bundled out in the last ball of the 19th over. Stars captain Temba Bavuma was the only player to score 25+, he scored 27 off 31 balls. 27 runs from the captain include two boundaries. The video of the yorker is getting viral over the internet. Here we are sharing the video of the incident.

Full. Straight. Bowled! Fantastic comeback from Dala after being hit for a big six by Gayle.

Earlier in the match, after winning the toss Jozi Stars, elected to bat first at The Wanderers Stadium in Johannesburg. Meanwhile, Jozi Stars could manage to score only 108 as they bundled out in 18.5 overs. From Jozi Stars only captain Temba Bavuma could manage to score 25+. In the reply, Nelson Mandela Bay Giants chased down the score in just 9.1 overs and won the match by nine wickets. And hence Junior Dala awarded with ‘Player of the Match’ for his outstanding spell. He had taken three wickets, which includes Gayle’s wicket with a beautiful yorker.

The Mzansi Super League is the premier Twenty20 cricket tournament in South Africa. It consists of six franchise teams representing different South African cities. The first edition of the tournament took place from 16 November to 16 December 2018. The league was founded by Cricket South Africa in 2018.