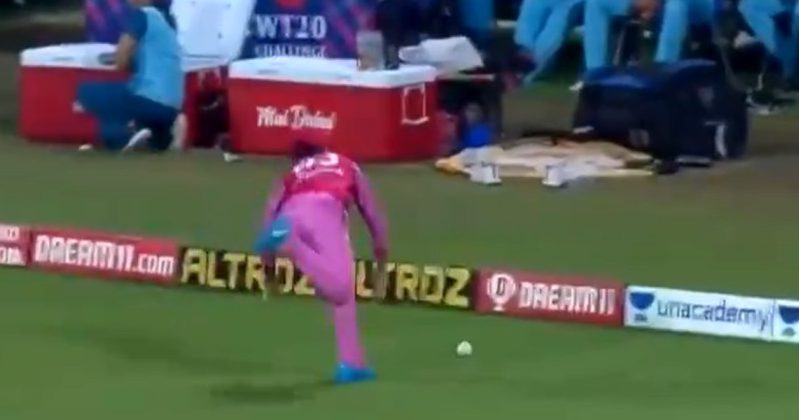 Trailblazers won the final of Women’s T20 League against Supernovas to clinch the trophy. The 6-day tournament ended on Monday with Trailblazers lifting the trophy under the leadership of Smriti Mandhana. The fans witnessed great moments in the field throughout the tournament and one such effort was on display in the final as Nattakan Chantam saved a certain boundary.

The Supernovas won the toss and opted to field. Trailblazers’ openers gave them a solid start by putting up a 71-run partnership for the first wicket. Both Deandra Dottin and Smriti Mandhana made sure they got off to a good start. Mandhana went on to notch up a half century and was even awarded with ‘Player of the Match’ award.

However, Supernovas’ bowlers bounced back and Trailblazers lost a flurry of wickets. They lost 7 wickets for just 17 runs and ended up with a below par score of 118. As it turned out, even an underpar score was too much for the Supernovas as they fell short of 16 runs and eventually lost the match. A lot of credit for the win goes to the bowlers and the fielders who made sure Supernovas had to toil for each and every run in the chase.

Nattakan Chantam dashed after the ball and just as the ball was going to touch the rope, she came up with a splendid dive to save two runs for her team. With disciplined bowling and brilliant fielding, Trailblazers restricted Supernovas to just 102, winning their maiden Women’s T20 Challenge trophy.