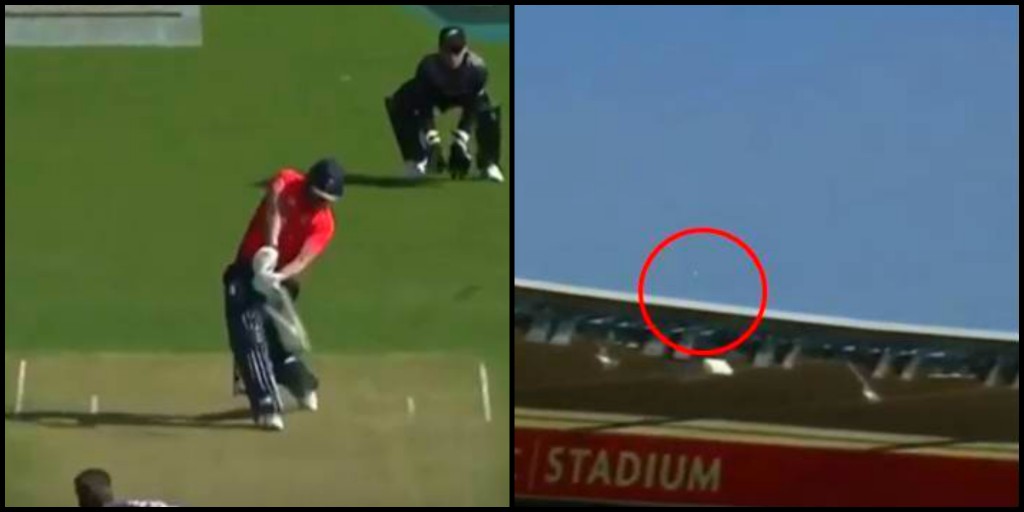 England tour of New Zealand 2019 has been started with the 5-T20 matches series. England had won the first T20 vs New Zealand at Christchurch while today in the 2nd T20 New Zealand has levelled the series 1-1. Hosts clinched a 21-run victory at Wellington. The visiting team failed to chase 172 runs and all-out on 155 runs.

In the 2nd New Zealand vs England T20, while chasing 172 England had a bad start of the innings as they lost 2 wickets on 3 runs. Eoin Morgan played a quick knock of 32 off 17 balls while Dawid Malan was the top scorer for England with 39 runs in 29 balls. Only four batsmen could reach the double figures mark.

England’s Dawid Malan showcased his hitting skills during the innings. In the tenth over of England’s run-chase, Malan hit a monstrous six off Jimmy Neesham’s delivery. The ball landed on the roof of Wellington stadium and went out of the stadium. This six is about 110 metres long.

However, the opening batsman got out in 12th over of the innings scoring 39 runs. Dawid Malan did not hide his disappointment after the loss. 32-year old said, “Every opportunity is a chance for someone like me. Myself, Vincey [James Vince] and Sam Billings have been around the squad for four years and waited a long time for these opportunities which have been few and far between. For us, when we do get an opportunity, it’s about scoring runs that win games of cricket. That’s why I’m a bit disappointed,”

WATCH VIDEO: Rohit Sharma Shuts A Reporter For Interrupting Him In Press