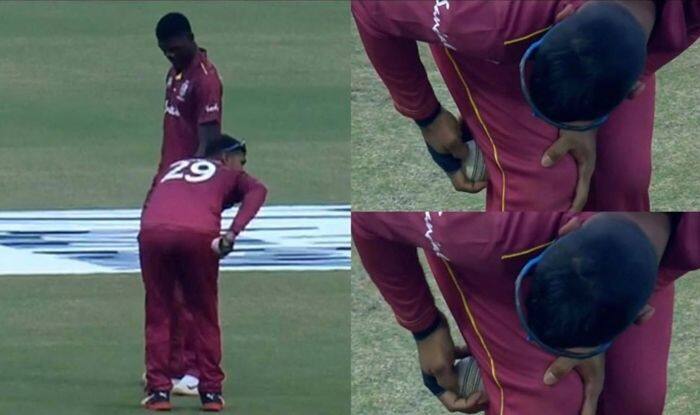 Afghanistan and West Indies are currently on India tour to play ODI series, T20 series and one test match against each other. All the matches in the tour to be played on Ekana Cricket Stadium of Lucknow. This ground is also the home ground of Afghanistan team.

In May 2019, Afghanistan Cricket Board had requested BCCI to Ekana stadium for their international matches. In August 2019, BCCI awarded the venue to Afghanistan as their third home venue in India, being previously played in Dehradun and Greater Noida.

Today both teams played their 3rd ODI match and by winning this one too, West indies clinched the series. Afghanistan batted first and put a total of 249 runs on the board. West Indies chased the target in 48.8 overs with Shai Hope scoring his 7th ODI ton, he scored unbeaten 109 off 145 balls.

Nicholas Pooran has come under the scanner for his suspicious activity with the ball. Pooran is making the headlines for the wrong reason. A video is making rounds on the internet in which West indies batsman can be seen doing something suspicious. Nicholas Pooran is scratching the ball while rubbing the ball at the back of his thigh. He could find himself in trouble if the video is investigated by ICC (International Cricket Council). Below is the video of the incident.