Delhi Capitals went on to score a massive 207 runs in their 20 overs which proved to be an uphill task for the Sunrisers Hyderabad. 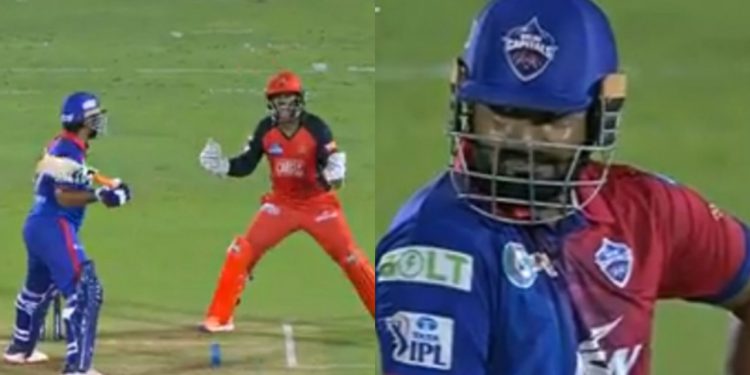 It was a high-scoring affair when Delhi Capitals and Sunrisers Hyderabad locked horns in the 50th match of the Indian Premier League. Both the teams tussled for two crucial points on the table and there was a great intensity shown by both the teams. A glimpse of it was seen in the ninth over as Nicholas Pooran gives a pumped-up reaction in front of Rishabh Pant after Shreyas Gopal knocked him over.

The Delhi skipper has not been in good touch in the ongoing edition of IPL. He has not got big runs and have struggled to hit the ball cleanly. In the pivotal game against Sunrisers Hyderabad, Pant tried to score quickly, but fell rather cheaply again. As he got out, Nicholas Pooran gave an intense and pumped-up reaction to send Pant off. Pant could only score 26 runs in 16 balls and fell to a delivery by Shreyas Gopal.

The energetic reaction by Nicholas Pooran came on the last delivery of the ninth over when Shreyas Gopal was bowling to Pant. The Delhi captain tried to hit a wide full-toss by Gopal too hard, but only ended up dragging the ball to the stumps. The ball took the inside edge of the bat and went onto the off stump. Pooran, who was keeping the wickets, yelped in delight in front of Pant and then went on to celebrate with the bowler.

The wicket of Pant didn’t really affect the Delhi inning as they went on to score a massive 207 runs which proved to be an uphill task for Sunrisers Hyderabad. They fell short of 21 runs and Delhi Capitals achieved a much-needed win to stay alive in the campaign. Delhi has now moved up to the fifth position with 10 points in as many games.