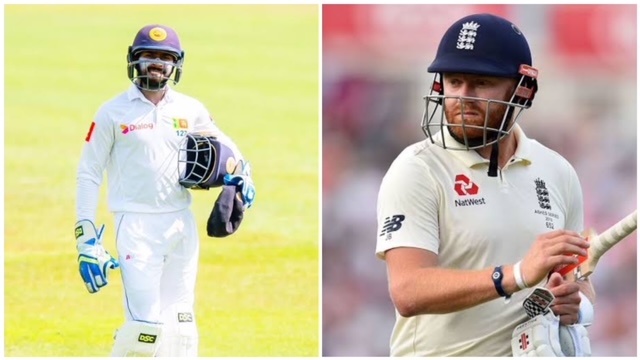 Sledging has become an inevitable part of modern-day cricket. When things go south for a team, the players try to get into the skin of their rivals and play mind games to distract them. This practice has become even more rampant in the recent few years. A similar incident took place in the ongoing second Test match between England and Sri Lanka when Sri Lankan wicketkeeper Niroshan Dickwella went all out to sledge the English batsmen.

Team England is currently touring Sri Lanka for two Test matches and they are already one up. The fourth day of the second Test is underway with the English team looking all set to mark another victory. Earlier, the Sri Lankan batsmen put on a great show with the bat scoring 381 in their first inning with the veteran Angelo Mathews being the stand out performer with a century.

The Lankan wicketkeeper Niroshan Dickwella shined with the bat too missing out on his maiden century by just 8 runs. Dickwella didn’t grab the eyeballs only for his batting performance though. The left-handed batsman and wicketkeeper went on a sledging spree on the third day of the match and picked on Bairstow, Root and Dan Lawrence.

Dickwella made teasing remarks on all the batsmen but Bairstow became victim to the wicketkeeper’s most vicious comments. Dickwella called out Bairstow for being dropped from the side for the upcoming Tests against India. He also went on commenting that the English wicketkeeper only plays IPL for the hefty amount of money it brings. As a result of constant sledging, Bairstow lost his concentration and got out.

Dickwella’s sledge work against bairstow 😂😂
“ Dropped from the India tour, but going to play the ipl, playing for cash only “ 😂😂 pic.twitter.com/d5zw36ij3h

Even the new entrant Dan Lawrence and the English skipper were not spared as Dickwella asked the latter the reason behind Bairstow’s exclusion from the team. Lawrence was also ridiculed by the keeper for the fact that the English batsmen, apart from Root, have not been able to handle spin bowling. Sky Sports’ experts Michael Atherton and Rob Key said that there was nothing derogatory in what Dickwella said.