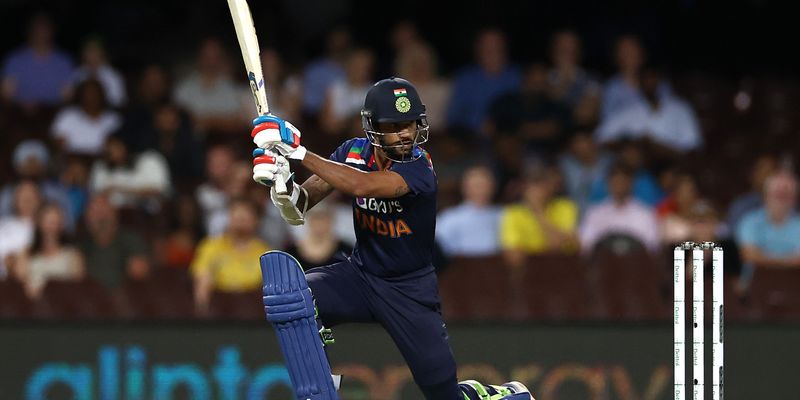 Wicketkeepers and stump microphones share a rather unlikely duo in cricket. Most of the times, all that’s said behind the stumps is often caught in the stump microphone. In the second T20 international against India, Aussie keeper Matthew Wade’s funny comparison of himself to Dhoni over a missed stumping has caught the attention of many. Wade is heard saying – ‘Not quick enough like Dhoni.’

“Not quick enough like Dhoni”, says Matthew Wade
Wicketkeepers rather look for cover over a missed stumping than chirp something over it later. This is what happened when Australian wicketkeeper Matthew Wade missed a stumping of Shikhar Dhawan and later could be heard saying he’s not as quick as MS Dhoni. A light-hearted moment, the end of which saw Wade, Dhawan and even the commentators have a good laugh.

Just as Dhoni did (as quick as he was at it), Matthew Wade tried to pull off a stumping out of nothing. It so happened during the 9th over of India’s innings, batsman Shikhar Dhawan had tried to play a cut and had missed. Matthew Wade had collected the ball behind the stumps and waited for Dhawan to lift his leg, so Wade could get him out stumped. Wade did manage to whip the bails off, and have the dismissal reviewed by the third umpire. Perhaps, he wasn’t as quick as MS Dhoni, the batsman was unmoved in his stance and the decision was not out. Dhoni in the past has inflicted such dismissals when batsmen have lost concentration and pulled off their foot only to get stumped, courtesy quick presence of mind by him. However, for Wade, it was a failed attempt to which he funnily ended up comparing himself to Dhoni. His chant at the back of the stump was a funny moment in the game that even had the commentators laugh at.

Here’s the video of the incident

India Win 2nd T2o, Claim Series
India chased down the target of 195 set by Australia to win the second T20 international and also the series, with one match still to go. India’s runchase was mastered by a quickfire 42 off just 22 balls from allrounder Hardik Pandy. His knock included 3 fours and 2 sixes; both of which came in the last over bowled by Daniel Sams. The win comes as a boost at the right time as India seek to gain some good momentum going into the four-match test series.